Sleep Regressions and How to Survive Them 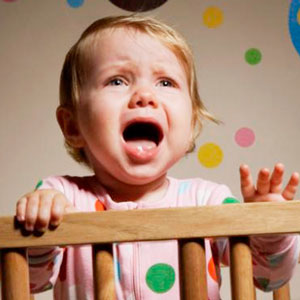 Just when you think you have it all figured out as a parent and your baby is sleeping on a consistent schedule, a new unfamiliar issue pops up which for some reason changes their normal sleep cycle.

Hello to the world of sleep regressions. It’s not often talked about, but at times, it may seem like the toughest battle yet.

There are certain periods in a baby’s life where sleep patterns start to become troublesome. They become fussy and start suffering from sleep deprivation. These situations can arise every few months as the baby is growing up.

Once you’re pretty sure that it’s not from another cause (illness, ear infection, etc.), there’s a good chance that what your baby is going through is actually a sleep regression.

While waking up throughout the night or not having “break” time due to skipped or shortened naps is tough on a parent, it’s just as difficult on the baby.

The rest of this article goes into what exactly a sleep regression period is, why it happens, and offers some tips to help both child and parent through the stage.

What is sleep regression?

Many call it such, but some believe the name is a misnomer or myth. In some ways, it feels that as if the baby is regressing in his or her sleep habits counter to the parents’ hopes for a few nights of peace and quiet.

Babies tend to start developing better sleeping habits within the first few months after birth. Soon, parents are hopeful that they can actually go through an entire night of sleeping without disturbing anyone. Alas, that isn’t the case and there comes a period when the baby’s sleep habits seem to go backwards.

During these periods, babies become fussy partially because they are sleeping less. They become more clingy and only want their mother. Babies also want to be nursed more.

Why do sleep regressions happen?

The regressions usually happen when there is a development in a baby’s progress such as when they start rolling around or crawling about. The cognitive growth of the baby spurs these regression moments because the baby’s mind is wired to start learning new skills at a rapid rate. While babies do learn fast, they also can get easily frustrated. As a result, that can affect their sleeping habits.

In some ways, babies are undergoing somewhat of a growth spurt though is has more to do with learning new things. As a result, they need more food and energy and require more nursing. Their minds a bit more active. But, since they haven’t learned patience, that leads to frustration and it is difficult for even adults to get sleep when they are overcome with frustration.

Some regressions come as early as five or six weeks from birth. Others can be as late as 24 months. However, usually there are only a few to deal with for each baby.

In addition to a growth spurt, a baby’s mind is quickly starting to develop. They become increasingly aware of their surroundings and start learning and analyzing in the process.

Many of the sleep tricks you’ve probably used earlier on no longer work at this point. Instead of holding and rocking the baby to sleep or putting him and her at the sleeping spot, they become more active.

This is the point where the baby goes from sleeping all the time to cycling through light and deep sleep like the rest of us. This means shorter nap periods and a lot of nighttime wake-ups. However, babies now need help getting back to sleep again.

In terms of activeness, babies start to roll around. They sometimes get stuck on their back or on their tummies while rolling. This causes them to become more irritable. Getting them comfortable on their tummies is an important part at this stage.

Sleep regressions are still only temporary, so the key is to get the baby back on the proper sleep path. Don’t panic when it hits. Be willing to take a step back such as going back to a pacifier or a swing to calm the baby down. However, these are only temporary solutions.

You want to get the baby back to where it was before sooner rather than later, so start teaching them sleep training methods. Slowly start to wean your baby away from the usual sleep associations. Parents can put the baby to bed when they are drowsy, but not asleep. It is a process that can take weeks, but is necessary.

Also, it could mean putting their daytime napping on a schedule. Developing a sleep routine can help a baby learn how to and when to fall asleep on his or her own. Having a good baby swaddle can help immensely in some cases. Check out our Miracle Blanket review.

Usually when the baby starts rolling around is when the first sleep regression occurs. Sometimes, it is three or four months and other times it is six. After rolling comes crawling and that is usually when the 6 month sleep regression period takes place. This can lead to increased hunger, more mobility and more activeness from the baby. Also, they could be teething by this point.

Again, you need to re-teach the baby to fall asleep on their own. If they start crawling, it can get a little more difficult as they are moving around at the crib. At this point, you’ll want to invest in a quality sleep sack to keep them feeling safe and secure in their crib (see our Woolino sleep sack review).

Keeping them close to their sleep patterns is important. You don’t want to try a quick fix such as feeding them at night. That could condition them to eat at night instead of the day. They are more active now while crawling and lunging at things. If they take three naps a day, try cutting down to two and go with an earlier bedtime.

Usually the crawling begins around this stage as well as the hand-eye coordination, particularly after the four-month rolling around period. Because their minds and bodies are learning and adapting to things such as toys, their minds are particularly active. This makes it more difficult for them to fall asleep. They also may start making speech noises.

On the bright side, this regression isn’t as bad as the one at four or six months. Babies have learned to sleep on their own now. Sometimes, it is a matter of letting them get tired and drowsy before putting them to bed.

If your baby has a tough time falling asleep, but then naps fairly well, then move back the nap time. The same applies to a quick, but short nap period. Yet, if the baby takes no more than 15 minutes to nap, but gets in a good nap period (over an hour), then be happy where he or she is at.

The fourth major sleep regression comes around the time when the baby may be close to learning how to walk. Obviously, this will create even more activity and awareness opportunities for them. This regression isn’t as bad as the first three, but don’t break the baby’s sleep cycle for a quick fix. This regression really only lasts a few weeks.

At this point, they become more resistant toward falling asleep even on naps. Let your baby practice crawling and walking a lot in order to wear them out by the time night arrives.

The 18-month sleep regression is one of the toughest. Your baby is now a toddler and along with that comes walking, “talking”, molars coming in, and all that other fun stuff. Your little one finds out that words and expression can lead to a whole new world of communication and possibilities.

However, they will still understand more than he or she can communicate back. This can lead to bouts of frustration on their part. Again, frustration potentially leads to sleep regression.

Some believe that discipline may be needed during the 18 month regression. Staying consistent with bed and nap times is crucial at this point. You don’t need for them to develop bad sleeping habits at this stage. So start to set firm limits to your child at this point.

Some older sleep coaching techniques can help. If you already invested in a Woolino or Merino Kids sleep sack, you should be good to go here as both of them are sized up to 2 years.

The baby has arrived at the “terrible twos” stage and could start exhibiting some not-so-fun behavior. Refusal to sleep is one of them and this leads to them to becoming tired and cranky, exacerbating the problem. Also, they could start potty-training sessions by this point and even having nightmares during sleep.

Be supportive, yet firm with your child. You need to stay the course in setting up discipline and limits to unruly behavior. Remain consistent with bed times and nap periods. Most children take naps up until age four, so don’t let them start developing bad habits even now.

It’s not going to be easy. For those extra rough days, a trip to the nail salon for a mani or pedi or some good dark chocolate may be in order.