Cruises. Cruise ships. We’re sure everybody saw at least one episode of “The Love Boat” or one of the many movies that take place on a cruise and we’re also sure that a lot of people fell in love with idea of spending a few days on a cruise ship, partying, visiting a lot of amazing places (even if for just a couple of hours) and enjoying a great ride. And the truth is that everybody, no matter if travel lover or not, has to try that at least once in a lifetime, because it’s a an amazing and relaxing experience (well, except if you have seasickness, case in which you’d better stay home).

A couple of days ago, we were reading a story about the Titanic and how it was the largest passenger ship of its time and we became really curious about passenger ships of our time. So I we opened our browser and started documenting about modern cruise ships (some of them real monsters) and here’s the list of the world’s 8 (don’t know why eight, guess we like this number) largest cruise ships. 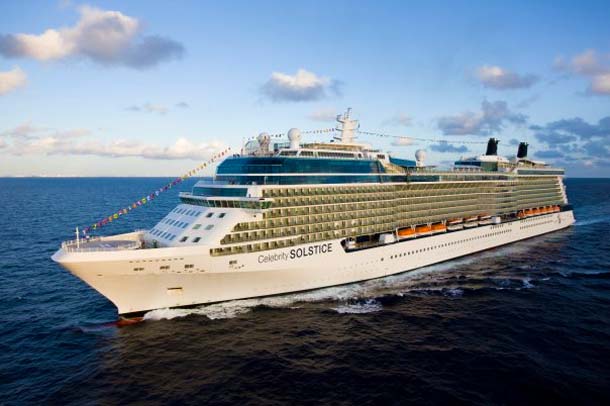 As for the amenities offered to passengers, the Solstice class ships features seven stateroom categories, a 1,400-seat theater, a casino, several pools, Jacuzzi’s, lots of bars and restaurants, an iLounge (which is basically an internet cafe combined with an Apple Store) and, perhaps its most interesting feature, a half-acre lawn covered with a special type of grass offering several entertainment choices.

The ships’ itineraries are very diverse, basically covering all the world, including the Caribbean, Europe or New Zealand and pricing is also very different, depending on the cruise itinerary, number of days, type of room and can range from as low as $400 up to $7-8,000. For more precise info, you can plan a cruise on Celebrity Cruise’s official website.

Launched in January 2011, the Disney Dream became the largest cruise ship operated by Disney Cruise Line. Built by the same Meyer Werft shipyard in Germany, the Disney Dream will be joined by a similar ship, Disney Fantasy, next year, both becoming the largest ships ever built in Germany. With a gross tonnage of 128,000 tons, a 1,080 ft (330 meters) length and a 121 ft (37 meters) width, the Disney Dream is 40% larger than the previous two Disney Cruise Line ships and its home port, Port Canaveral, was forced to expand the dock in order to properly accommodate the ship and its future sister. 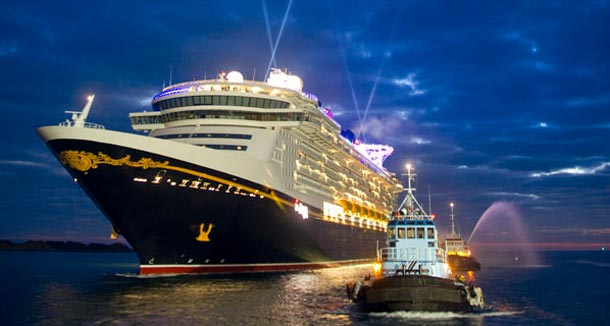 Unlike most cruise ships out there and like all Disney Cruise Line ships, the Disney Dream is targeted at families and doesn’t have any casinos onboard. But amenities are plenty and include a full-sized basketball court, two smaller courts for children, a 9 hole mini-golf course, a 756-foot long water coaster called “The AquaDuck” (the first water coaster at sea), 3 pools, 5 restaurants and several bars and lounges. Also, what’s interesting about the ship is that the horn doesn’t sound like regular ship horns, instead it can play six Disney songs.

Carnival Dream, the largest cruise ship operated by Carnival Cruise Lines entered service in September 2009 and was the largest ship built at the Fincantieri Navali shipyard in Italy, at an estimated investment of $740 million. The ship has a gross tonnage of 130,000 tons, is 1,004 ft (306 m) long and can accommodate 3,646 passengers.

Among the amenities offered to guests there is the “Carnival WaterWorks” water park, a two-deck mini golf course, a giant 12 by 22-inch LED screen, a 1/2-mile promenade area with cafes and “scenic jacuzzi’s”, the “Cloud 9” spa, plus several restaurants, bars, lounges and clubs. 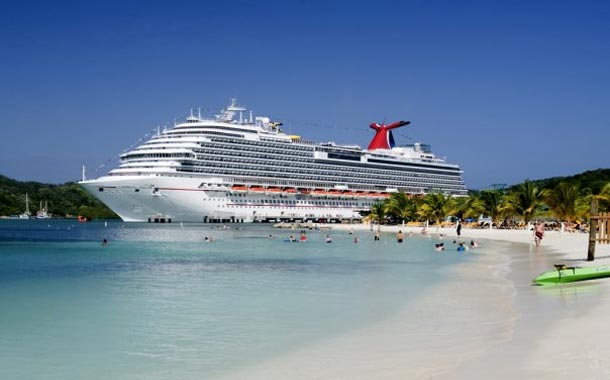 The ship currently operates 7-day cruises from Port Canaveral, Florida to Western and Eastern Carribean and the pricing starts from $419 for a regular room and goes as high as $2,119 for a beautiful suite. For more details about the itinerary and pricing, check out the ship’s official website.

At 135,000 gross tons, the MSC Fantasia is the largest ship operated by an European cruise line, MSC Cruises. The ship also has an almost identical sister, the MSC Splendida, both measuring 124 feet (333 meters) in length and having a capacity of 3,900 passengers. However, the flagship is the MSC Fantasia, which took her first voyage in 2008, after being officially named by the famous Italian actress Sophia Loren. 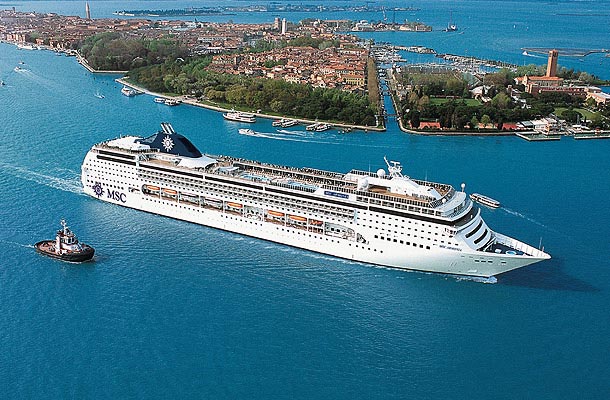 The MSC Fantasia passengers can enjoy the MSC Aurea Spa, 12 jacuzzi’s, 4 swimming pools, 5 restaurants, a 4D cinema, a Formula 1 simulator and an exclusive MSC Yacht Club, for VIP passengers, including an area with a Swarovski crystal floor and transparent ceiling making the nights really amazing.

The ship currently operates cruises in the Mediterranean Sea and for more details check out its official website.

As for the amenities, the Voyager-class ship offer their passengers a lot of options for spending the time, including a rock-climbing wall, ice and roller blades skating rinks, a Casino Royale, 9-hole mini-golf course, a full-sized basketball court, themed bars, restaurants and lounges, plus spa and fitness centers.

The five ships make cruises all year long in almost every part of the world, so if you’d like to be a part of the Voyager magic, make sure you check out their official website.

The MS Freedom of the Seas is one of the three Freedom-class cruise ships operated by Royal Caribbean International, together with its sisters MS Liberty of the Seas and MS Independence of the Seas. The MS Freedom of the Seas was built in Finland and, when it was launched in 2006, was the largest passenger ship ever built, holding this title until 2009. With a gross tonnage of 154,407 tons, the ship is 1,111.9 ft (339 meters) long, 209 ft (64 meters) tall and can accommodate 3,634 passengers and 1,360 crew members. 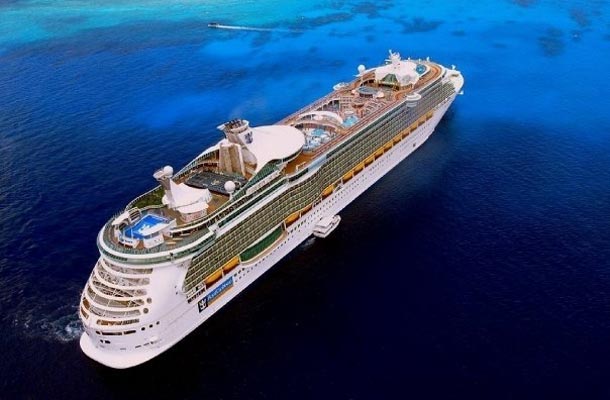 As for the amenities offered to passengers, the MS Freedom the Seas, like all Freedom-class ships, has a 445 ft (136 meters) long promenade with shops on each side, a water park, two swimming pools, rock-climbing wall, mini golf course, a full-sized basketball court, a full-sized Everlast boxing ring, ice-skating rink, an onboard wave generator for surfing called the FlowRider, dozens of restaurants, bars, lounges and clubs and a casino.

Currently, the MS Freedom of the Seas’ home port is Port Canaveral, Florida and the ship operates cruises to the Caribbean. But the other Freedom-class ships, the MS Liberty of the Seas and the MS Independence of the Seas have much wider itineraries, including cruises in the Mediterranean and the European side of the Atlantic. For more details, check out their official website.

At 155,873 tons, The Norwegian Epic, owned by the Norwegian Cruise Line, is the largest cruise ship ever built in France, being launched in 2010. The ship was suppose to have two sisters, but a dispute between Norwegian Cruise Line and the builder, STX Europe, led to the cancellation of the other ships, so the Norwegian Epic is the only one of its kind. The cruise ship is 1,081 ft (329 meters) long, has 19 decks, a top speed of 22 knots (41 km/h) and has a capacity of 4,100 passengers and 1,708 crew members. 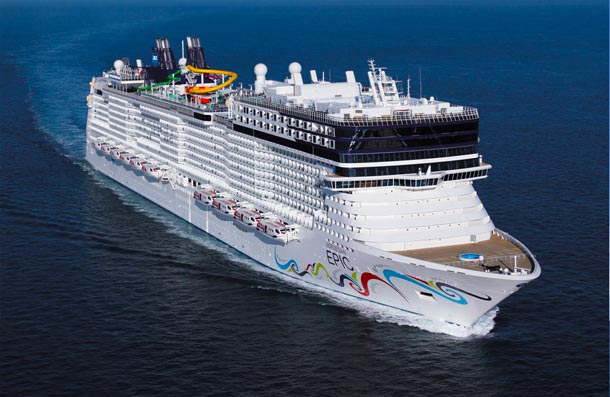 bowling alleys, an Aqua Park with the only tube and bowl slide at sea, a top-class spa center, the world’s only ice bar at sea, plus more than 20 dining options and a lot of bars, clubs and lounges. As for its itinerary, the Norwegian Epic is quite a globe trotter, its routes covering Western and Eastern Caribbean, Europe and Western Caribbean, plus a Transatlantic journey. For more details, make sure you visit their website.

And here we are, finally, at the world’s largest cruise ships, the MS Oasis of the Seas, which, together with its sister ship, the MS Allure of the Seas, are the current “monsters” of cruise ships. When it was launched in 2009, the Oasis of the Seas broke several records: first of all, it has a gross tonnage of 225,282, almost 75 percent more than any existing cruise ship, it is 1,187 ft (362 meters) long and it was the first ship to carry more than 6,000 passengers. The estimated cost for one ship is around $1,4 billion. 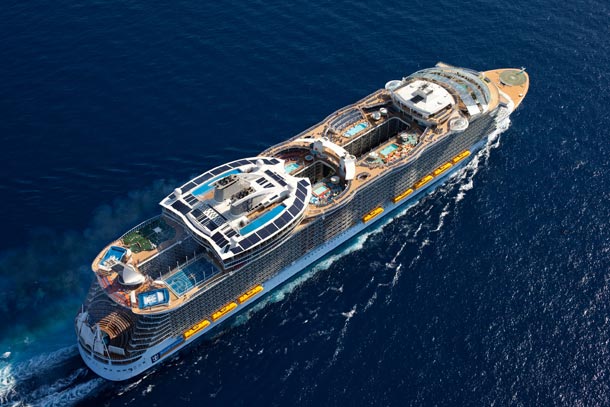 As for the amenities offered to passengers, there’s no point in telling that you can do just about anything aboard the MS Oasis of the Seas and the MS Allure of the Seas. There are five swimming pools, a mini golf course, a zip-line, basketball and volleyball courts, two rock-climbing walls, two surf simulators and dozens of themed restaurants, bars and night clubs. Both the Oasis and the Allure of the Seas currently serve cruises from Fort Lauderdale, Florida to Eastern and Western Caribbean and if you plan on boarding one of them (and you should), check out the ships’ special section on the Royal Caribbean website.

How about you, which one do you like most? And if any of you have been aboard any of these ships, please share your experience with us, we’d love to hear your thoughts and impressions.