The Most Impressive Ice Hotels in the World

I’ve always found ice hotels to be amazing places, especially with them being so rare, due to the specific climate conditions they require. And I’m sure it’s not easy building and maintaining one every year, but still, there are thousands of people who would find the experience fascinating but who won’t travel thousands of miles just for this. And considering the average temperature in the hotel is between -5 and -2 degrees Celsius (23-28 F), you have to admit these are not the most pleasant conditions. Oh, by the way, the temperature we’re talking about is inside the hotel, in the rooms, not outside.

Like we said before, we think ice hotels are fascinating places and there are dozens of reasons to support that. First of all, just think about the fact that the owners build the hotel every year (every fall, to be more specific), using ice and snow blocks held together by a type of frozen water called snice. And when the temperature rises (in spring, usually), the hotel melts down so their life span is pretty short. So let’s see what are the most interesting ice hotels in the world.

The Icehotel in the Jukkasjarvi village in Sweden is THE ice hotel, being the first one in the world, opened in 1990 by Yngve Bergqvist. The hotel is opened to public every year, from December to April and more than 1,000 tons of ice and snow are used for the construction that, in the end, features rooms for around 100 guests, a bar and a church among others. And at 64,000 square feet (6,000 square meters), it is widely recognized as the largest ice hotel in the world. 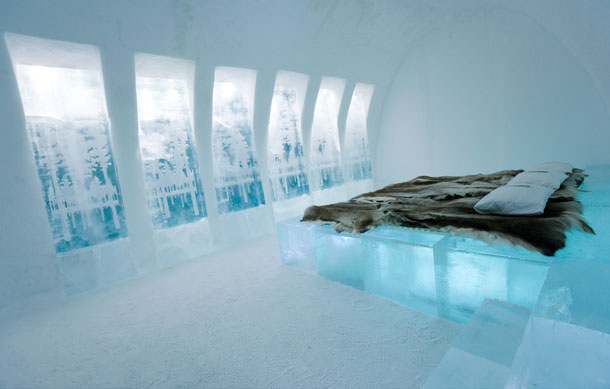 Also, what even more interesting about this ice hotel is the its founder managed marketing. Ever since it was first built, its founder partnered with Absolut Vodka which organized a lot of events, including a Gianni Versace photo shoot in 1994. Also, the Icehotel created the Ice Bar concept, which is a bar made of ice, with glasses made from ice from the Torne River that flows right next to the Icehotel in Sweden. While the first Ice Bar was opened in Jukkasjarvi in 1994, today there are also Ice Bars in London, Stockholm, Tokyo and Oslo. 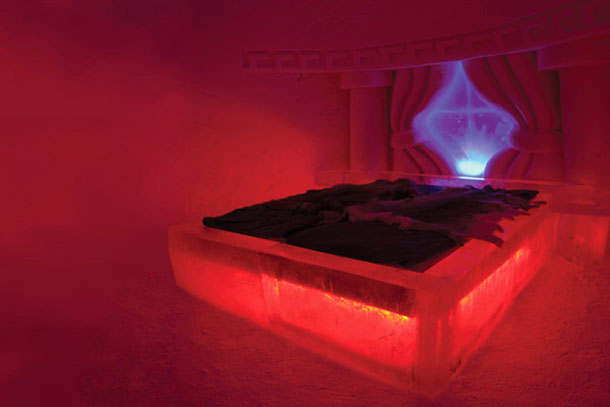 Guests at the Snow Village can surely complain of the cold, but definitely not of the entertainment choices the hotel offers: snowmobile rides, reindeer or husky dogs sleigh rides, cross-country skiing,
arctic fishing or Lappish ceremonies are just a few. The price for a double room for one night starts from $170 (120 Euros) and goes all the way up to $450 (320 Euros) for an Ice suite.

On of the very few ice hotels in North America, the Ice Hotel (Hotel de Glace) was actually the first one built on the continent, being inaugurated on January 1, 2001. While the original location was Montmorency Falls Park on the outskirts of Quebec, starting with 2002 the hotel was built in the nearby Duchesnay resort. Every year, 60 workers built the hotel from 500,000 tons of ice and 15,000 tons of snow and the final result houses 85 beds covered with deer furs, mattresses and Arctic sleeping bags. The only heated parts are the bathrooms, which are located in a separate structure. It is estimated that the hotel building costs are around $350,000. 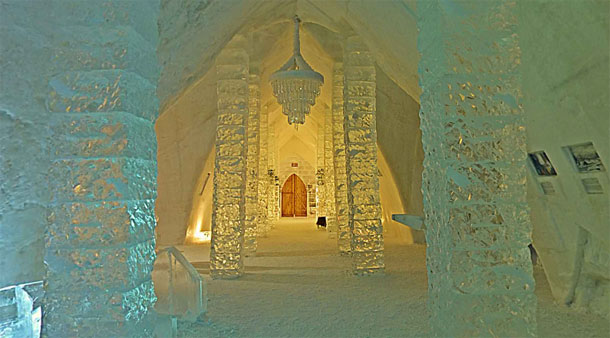 Compared to the other ice hotel, the Hotel de Glace offers more entertainment, including an N’Ice Club, Ice Cafe, nightclub and movie theater, plus a chapel which made the hotel being described as one of the most beautiful wedding locations.

Located near the most eastern town of Norway, Kirkenes, the ice hotel is very close to the Russian border, but don’t be scared, because the place offers excellent amenities for guests. Opened in 2006, the hotel offers 20 rooms for its guests, plus it also has a 26 feet (8 m) high snow dome, the largest in Norway. 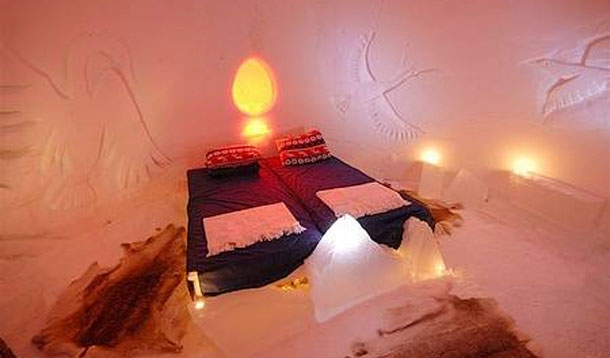 While the ice rooms are its major attraction, the hotel also features an ice bar made of 25 tons of ice, a very stylish restaurant called Gabba, that serves local food prepared on open fire (the fresh salmon is a must), sauna and for animal lovers, close to the hotel there is a reindeer park and a husky farm.

Located 155 miles (250 km) away from the North Cape, the Sorrisniva Igloo Hotel is the most northern ice hotel in Europe. The whole resort spreads on 21,500 aquare feet (2,000 square meters) and features 30 rooms beautifully decorated with ice sculptures, a gallery, a chapel and, of course, an ice bar where drinks and food are served on ice glasses and plates. 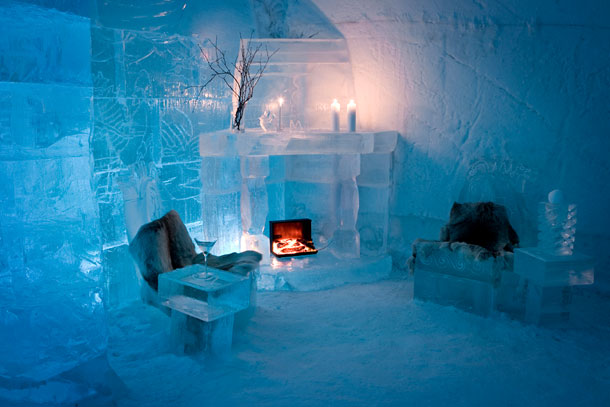 What’s even more interesting about this hotel is that, every year, it has another theme. For example, in the past, there were years where it had Norwegian fairytales theme, Viking theme or wild animals of the region. Besides that, the hotel also offers snowmobile rides, dog sleigh rides and riverboat trips on the nearby Alta river.

The first ice hotel in Eastern Europe was opened in 2006 in Romania and it lies right next to Balea Lake at an altitude of 6,670 ft (2034 m). And if that’s not enough for you, you must know that the ice hotel is located in the middle of Transfagarasan road, called “the greatest road in the world” by the crew from Top Gear, the world’s most popular car TV show. Unfortunately, the road is closed through the winter (when the hotel is opened), so the only way to get there is by cable car. 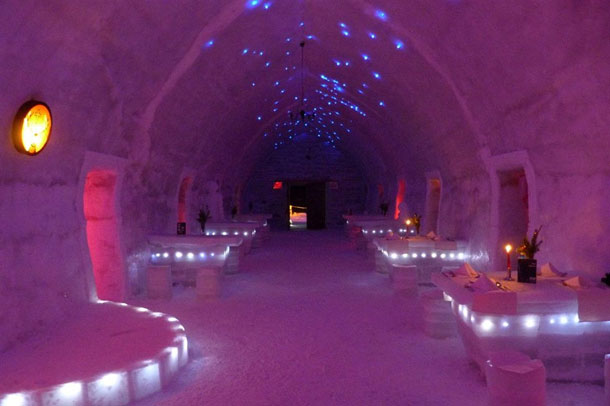 The hotel features 10 small rooms and a chapel, while guests are offered several entertainment packages such as ice sculpting lessons, ice skating, snowmobile rides and even heliskiing in one of the most beautiful areas of Eastern Europe.

In western Finland, very close to the Swedish border and right next to the town of Kemi lies the Snow Castle, an impressive snow hotel in the shape of a…yeah, a castle. With 21 rooms (including a honeymoon suite), the hotel also offer a snow restaurant and a snow chapel, and guests can also enjoy all sorts of concerts and performances the hotel organizes. 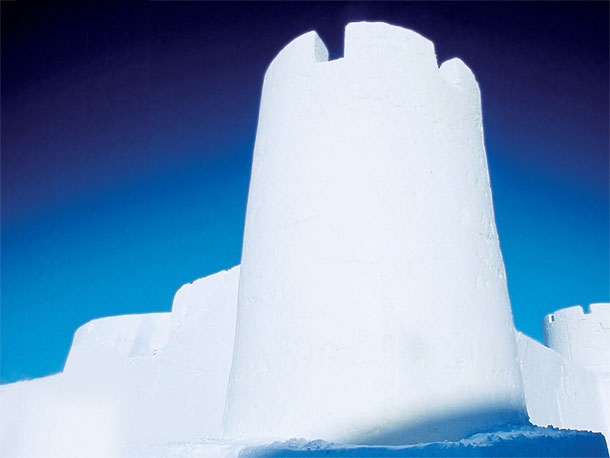 Another interesting attraction, starting this year, is the ICE IN ICE photo exhibition which features ice photos taken bu local photographer Seppo Rintala, photos which are embedded in ice.

So these are the best known and most beautiful ice hotels in the world. What do you think…where would you like to stay, at least for one night only? And if you were already at one of the these, please, feel free to share the experience with the rest of us!