Amazing Unusual Hotels Across the World

How would you like to stay in a former prison, a sewage pipe or in a cave? 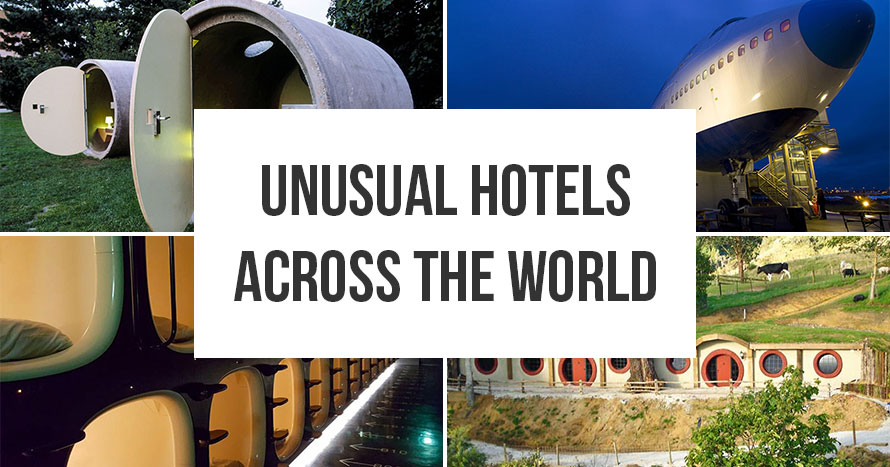 There are thousands of hotels across the world and while some stand out judging by their location or the amenities offered to guests, others are remarkable only considering the ideas behind them. While many hotels have swimming pools, private beaches or wireless internet connection, nothing can match a floating hotel, one that has rooms built in caves, in former jail cells, in a decommissioned Boeing or a hotel built entirely out of salt. And while a stay at some of these hotels is not the most comfortable experience, it’s definitely one worth trying at least once in life.

Sounds interesting? You bet! So let’s see some of the most unusual hotels in the world, which are also fascinating at the same time:

If you thought only rats live in the sewers, then you’re so wrong! Because now you can live there too! Ok, maybe the comparison is a little harsh, but it was the first thing that crossed our minds when we saw the Das Park Hotel. The first location was opened in Ottensheim (near Linz), Austria. Located on the Danube river, the hotel features three rooms created from 8-feet long sewer pipes that have been redecorated to allow proper accommodation. 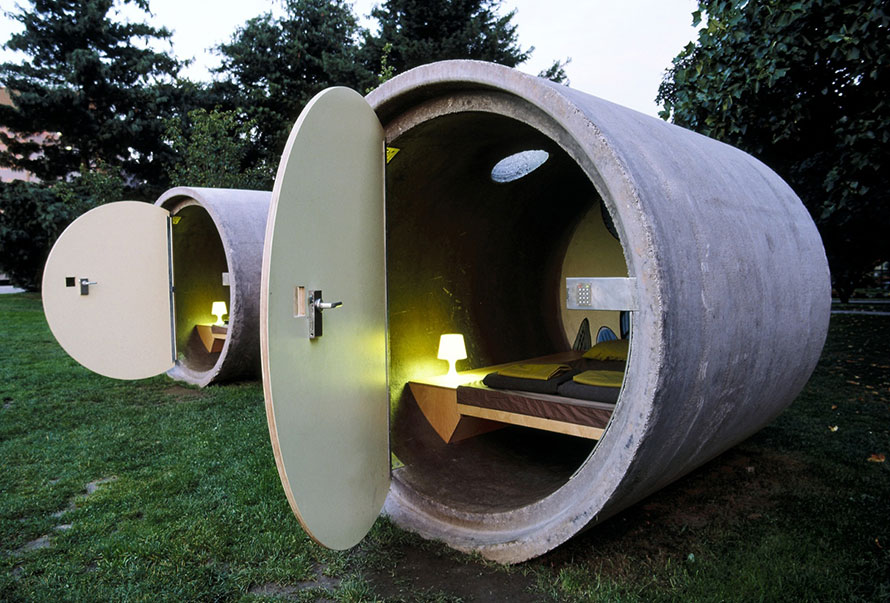 If you’re into new experiences, then you must visit this hotel, but if you’re only looking for decent place to spend the night, you might want to reconsider, because the sewer pipe rooms only have a bed, a small storage space, and electricity. No bathroom, no toilets, while the free breakfast is offered at a nearby gas station. And since no heating is available, the hotels are open only from May through October.

Even though conditions are not top class, it seems the hotel is successful, because a second location was opened, near the city of Essen in Germany. 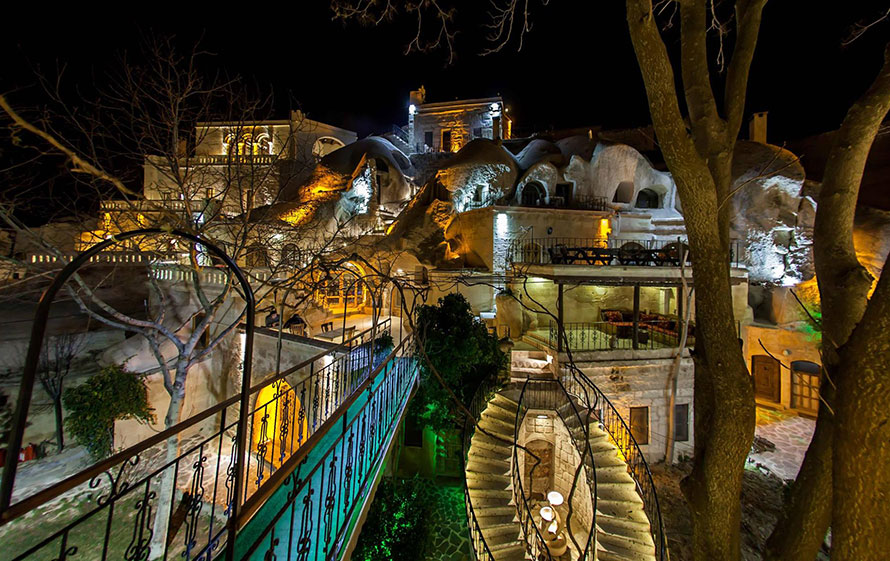 But don’t think that if it’s called a cave hotel, you’re going to live like in the prehistoric times. On the contrary, the hotel offers plenty of modern amenities such as private bathrooms, telephone, central heating, LCD TVs and wireless internet.

All these make the Gamirasu Cave Hotel one of the most popular destinations in Turkey, especially among honeymooners, even though prices are not very cheap, ranging from 95 Euros per night (for the standard double room in low season) and up to 1,200 Euros for the Byzantine King suite. Oh, and by the way, we loved Beethoven’s “Moonlight Sonata” playing on their official website.

Seeing how more and more Brits decide to spend their vacations on foreign beaches, the British travel company LateRooms decided to do something about this and built the first sand hotel in the world. Located on the Weymouth beach in Dorset, England, the 50 square meters hotel was built from 1000 tons of sand and it cost 10 pounds per night. 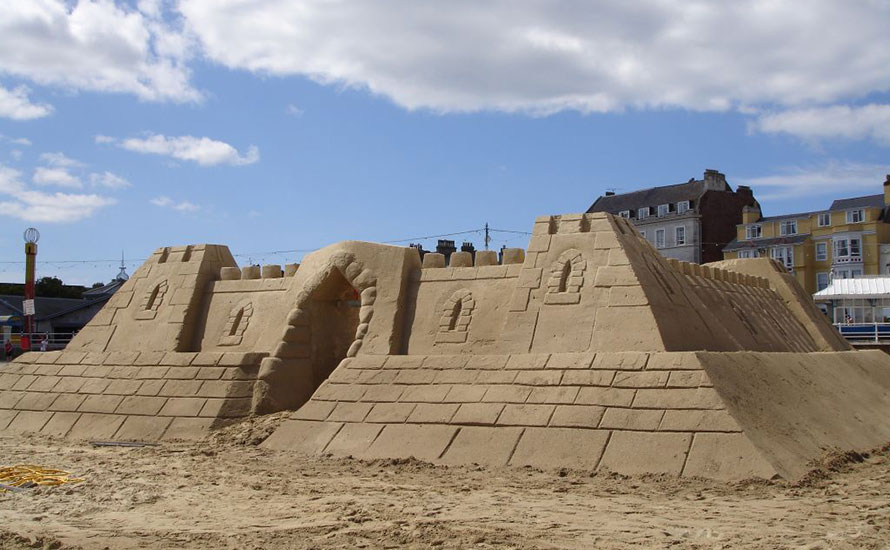 The hotel was first built in 2008 and we have no idea if it was built again in the following summers, but you have to admit it’s a fascinating idea. Of course, the conditions were not top-class, with sand getting everywhere and no toilets available, but that doesn’t mean it wasn’t worth trying the experience. 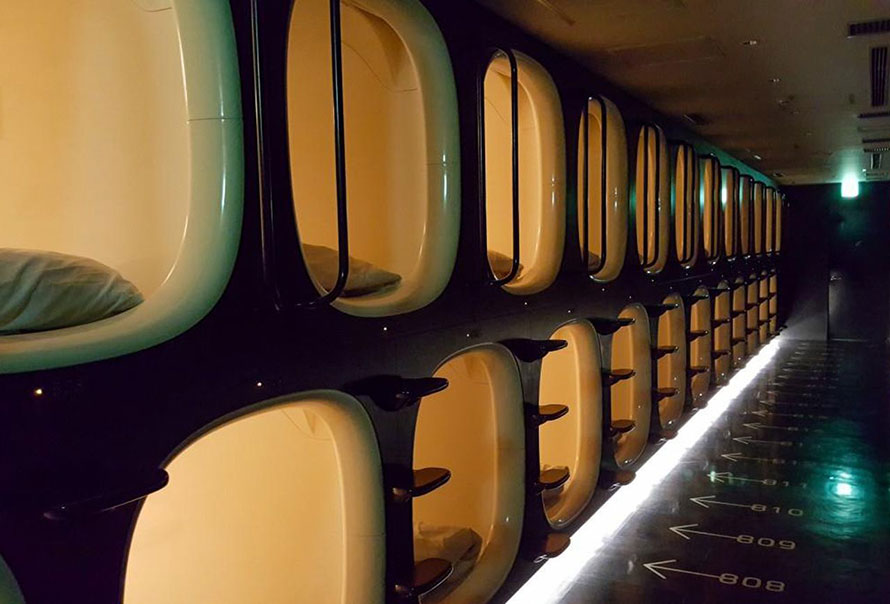 A typical capsule hotel has around 150-200 capsules but there are some having as many as 600 “rooms”. And even though comfort is a little higher than in a coffin, the capsule hotels are pretty popular among Japanese men too lazy, with too much work to do or too drunk to go home. Not to mention that with the recent harsh economic conditions, more and more Japanese can’t afford a regular house so they rent a capsule by the month.

Several attempts to open capsule hotels in other parts of the world were made, but in many countries, authorities didn’t allow the opening of such hotels due to safety concerns.

Though its official name is the Capsule Hotel, this Dutch hotel is quite different from the Japanese capsule hotel. Created for the first time in 2004, as an art project by Denis Oudendijk, the hotel features several oil rig survival pods built in the ’70s that were remodeled to allow the accommodation of up to three guests per capsule.

Being a little bigger than the Japanese capsules, each pod measuring about 12 feet, the survival pods hotel is also a little more comfortable (with a big accent on the “a little” part), so if you’re looking for a place just to protect you from rain, this is the place to be. However, surprisingly, the hotel was quite a success, its created planning on opening two more, in Amsterdam and Nancy, France.

So what happens to a Jumbo Jet in its afterlife? While most probably go to scrapyards, there are a few lucky that turn into something amazing. Just like this 1976 Boeing 747-200 which was bought by Swedish businessman Oscar Dios from the bankrupt Swedish airline Transjet in 2006. The time he heard about the jet coincided perfectly with his plans for expanding his hotel business. So he took the decommissioned 747 and turned it into a splendid hostel next to the Arlanda airport in Stockholm, Sweden. 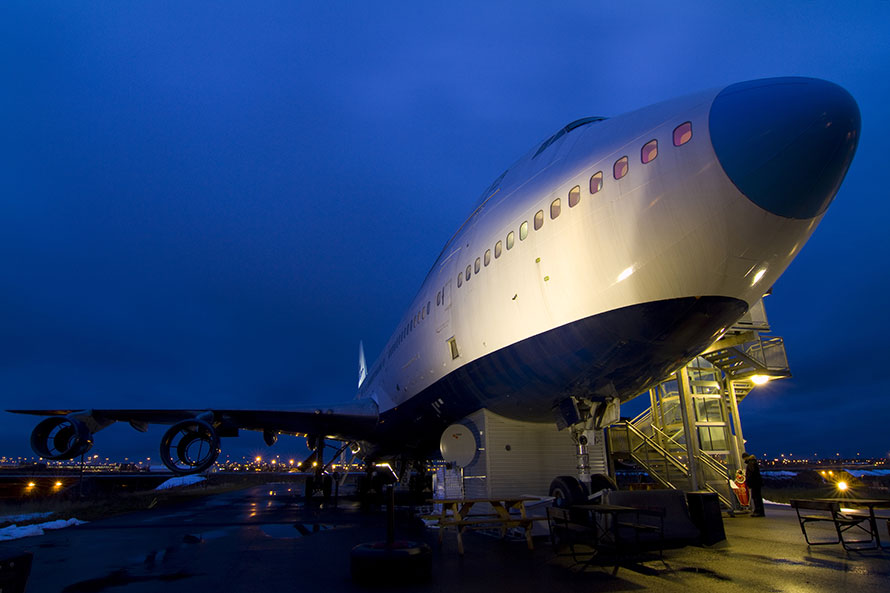 After important remodeling efforts, the Jumbo Stay hostel now has 27 rooms, each one featuring two or three bunk beds and measuring around 65 sq-ft (6 square meters). Each room has LCD TVs that can even show you the departure times for Arlanda airport flights, plus wireless internet. The toilets are in the hallway, except for the Cockpit Suite, Black Box suite and one single room, that are equipped with their own bathroom. But that’s not the only attraction offered by the Cockpit Suite, because it also has original parts from the aircraft’s cockpit and guests have a splendid view of the airport’s runways.

Room prices are decent, a dorm bed costing $65 per night, a double room around $200 and the most expensive room is the Cockpit Suite, at $530 per night.

Ever wondered what it feels like to be in jail? Well, if you did, the Alcatraz Hotel in Kaiserslautern, Germany, is the hotel you’ll want to check in. Though it has nothing to do with Germany, Alcatraz is probably the best-known prison in the world, so this must be the reason the owners decided to go with this name. Located in a former German prison, the Alcatraz Hotel offers three kinds of rooms, Cell Rooms, Comfort Rooms and Suites, and if you want the authentic jail feeling you must choose the Cell Rooms (they’re also the cheapest ones). 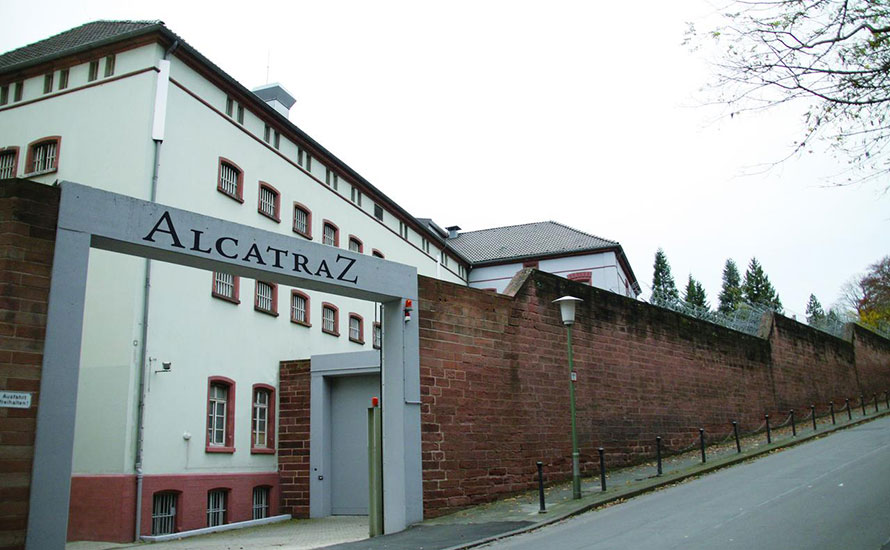 LCD TV, free internet, and telephone are standard in all rooms and while Comfort Rooms and Suites have private bathrooms, the Cell Rooms have community showers on the hallway and the only sanitary features you will get in your room will be a sink and a toilet. And if that doesn’t make you feel like you’re in jail, then the barred windows will definitely get the job done.

Room prices start at 49 Euros for a single Cell Room and go as high as 159 Euros for a double Suite. And of course, if you’re in jail, you will get free meals, so a free continental breakfast is included in the room’s price.

Located in southwestern Bolivia, close to Salar de Uyuni, the largest salt flat in the world, the original salt hotel opened in 1995 but was closed down in 2002 due to serious sanitary problems. A new salt hotel, called the Palacio de Sal (Spanish for “Salt Palace”) was built in 2007 and became a very popular tourist destination in the area. And the only reason the hotel was made of salt was that other construction materials were very expensive to get in that area. 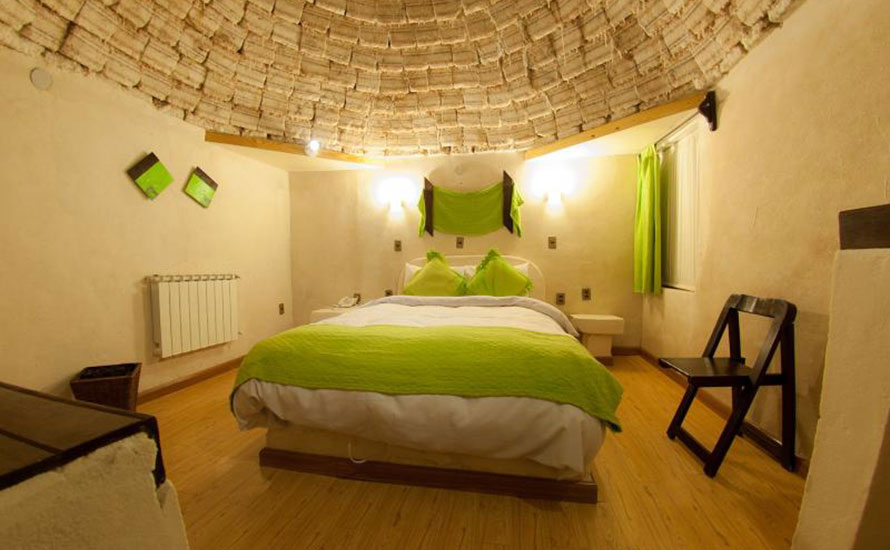 But one thing’s for sure, the salt hotel is an amazing place to stay, because almost everything in it, including walls, floors, beds, and chairs are completely made of salt. All 16 rooms have a private bathroom, central heating and electricity and guests can even enjoy a golf course on salt. The hotel also has a sauna, but it’s closed for the 2011 season.

And if you’re like us, then you’re probably asking yourself the same question and to answer that, no, you can’t lick the walls as there’s a strict hotel policy about that, in order to prevent degradation.

Ever wondered what would it feel like to live, if only for a day, in J.R.R. Tolkien’s Middle-earth? Well, we’re happy to tell you that you can do that. It’s not exactly Middle-earth, but it’s pretty close, and we’re talking about the Hobbit Motel in Woodlyn Park, New Zealand, the amazing country where most of the Lord of the Rings movie was shot. 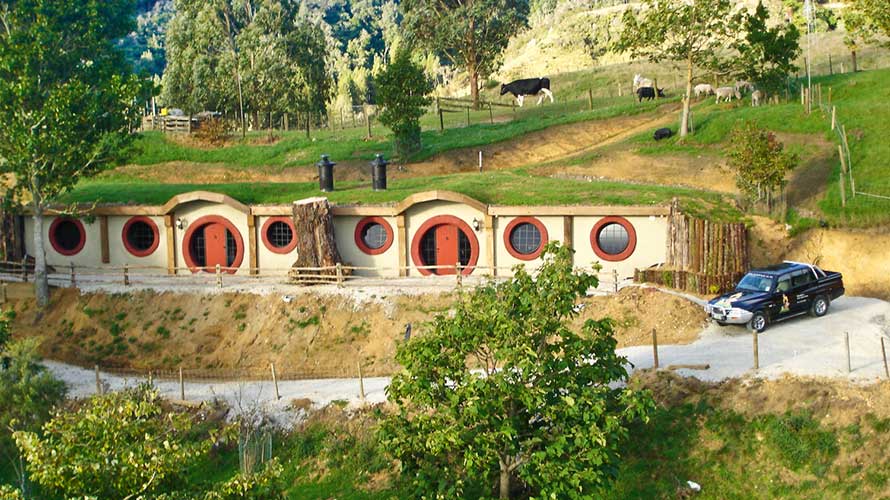 The motel consists of several underground rooms, with round doors and windows, just like in Tolkien’s books. But the similarity ends here, because on the inside the rooms are quite modern, having bunks or a double bed, a kitchen and a bathroom. Also, polystyrene blocks were used to build the motel, so thermal isolation is pretty good. This means you won’t have any problems with the heat in the summer or with the cold in winter.

Prices start at around $280, but it gets cheaper if you’re a larger group, because each room can accommodate up to 6 people.

Salt & Sill, the first floating hotel in Sweden is located on the Kladesholmen island, a small fishing island about an hour and a half north of Gothenburg, and it features 23 rooms, including one suite, 5 conference rooms, and one restaurant. Not a big deal for a regular hotel, right? But the Salt & Sill is no regular hotel because the two-story construction is built on floating pontoons. 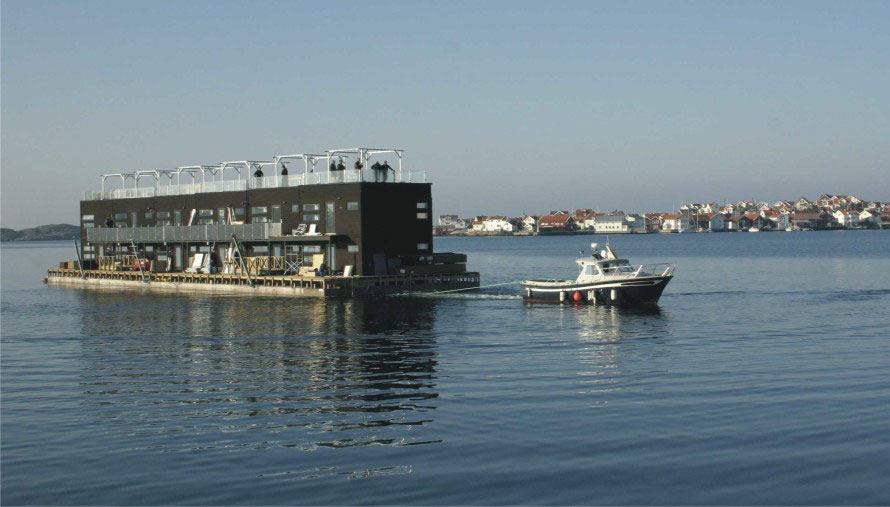 Each room has its own separate entrance and guests can also enjoy a small outdoor seating area, while the rooms’ interior decoration is focused around Scandinavian simplicity (and that’s good, considering IKEA’s success). Also, each room is named after spices used in the hotel’s kitchen and the colors are also matching.

And that’s not all the Salt & Sill has to offer because the hotel also offers “the world’s fastest floating sauna”, a sauna boat similar to the hotel, but a lot smaller, which can reach speeds up to 15 knots.

If you’ve been to any of these hotels, please drop a comment below and tell us about your experience. And if you know any other hotels that should be on this list, please let us know.