Most Beautiful Airports in the World

Nobody likes to waste time sitting around and waiting for delayed flights, missed connections, wandering between terminals or waiting for luggage. But there are some airports in this world that are such masterpieces that any moment they could be turned into tourist attractions.

And that’s a great thing, because when you arrive somewhere for the first time, the airport is usually the thing that gets you the first impression about that place (and we all know how much this first impression counts). And in some parts of the world local authorities care about these first impressions and about the fact that we like clean, well-organized and modern airports and built some breathtaking structures that impress visitors.

So let’s take a look at the world’s most beautiful airports (the order is random):

The largest airport in the United States and the world’s second largest airport by total area was opened in 1995 and is located 25 miles away from Denver, Colorado. In terms of aesthetics, the airport’s main highlight is the Jeppesen Terminal. The multi-award winning peaked roof design was created by Fentress Bradburn Architects and it reflects the snow-covered mountains specific to the area and are also inspired by the Native American teepees from the early history of Colorado.

In 2002, South Korea (together with Japan), hosted the 2002 edition of the FIFA World Cup, one of the world’s most important sporting events. In preparation for the event, a year earlier, in 2001, the Incheon International Airport was opened, 30 miles west of Seoul, the country’s capital city. The main terminal was designed by Fentress Architects’ president Curtis Fentress himself. The result? An airport that has been rated as the best airport in the world by Airports Council International seven years in a row (from 2005 to 2012). 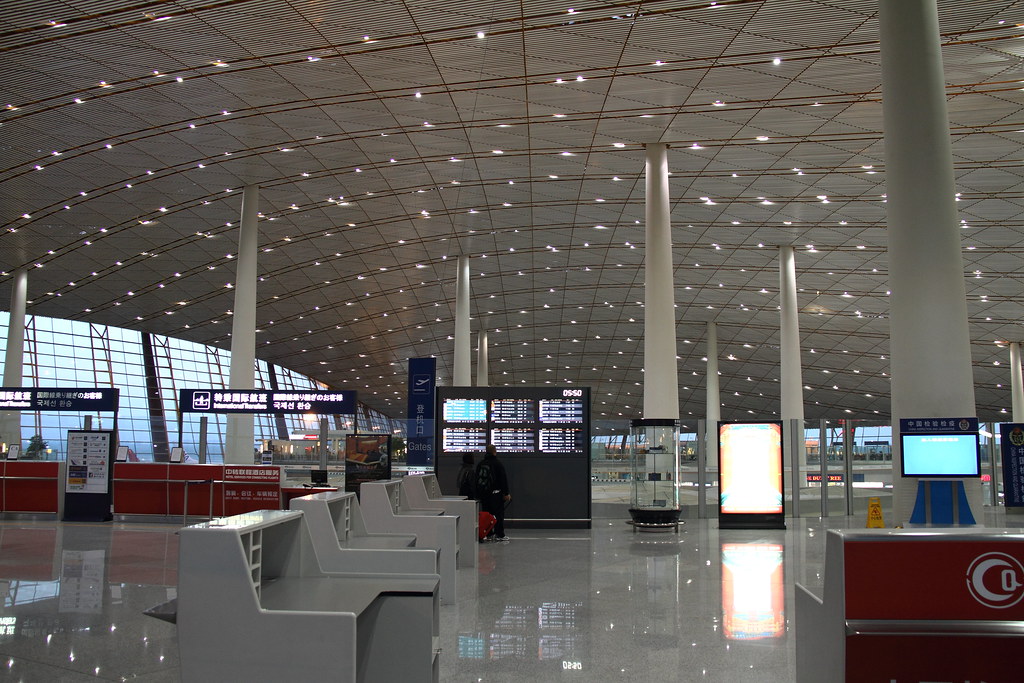 Located 20 miles north-east of China’s capital, the airport was opened in 1958. The first terminal is now being used for private flights, because a second terminal was added in 1980. But la piece de resistance is the huge Terminal 3, which was opened in 2008, right before the Olympic Games. The terminal was designed by UK-based architect Foster and Partners and tt took the Chinese three years to build it. But the result is absolutely amazing and just so you can get an idea of its massive size it is larger than all 5 terminals at London’s Heathrow combined. At its opening it was the world’s largest passenger terminal, but it lost its title a few months later when Terminal 3 at the Dubai International Airport was opened. 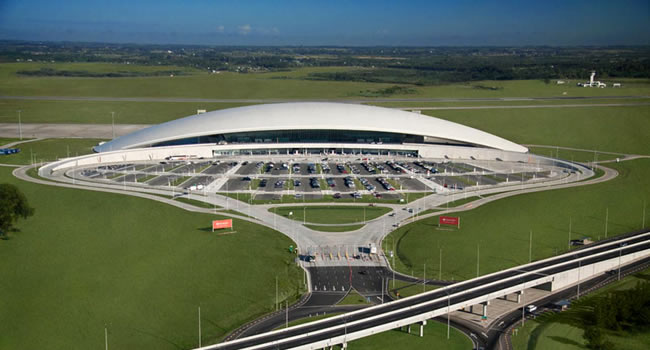 Serving Uruguay’s capital city, Montevideo, which is 9 miles away, the Carrasco airport was opened in 1947, but the current beauty was created between 2007 and 2009, under the supervision of Uruguayan architect Rafael Vinoly. One of the airport’s most impressive features is the large viewing area on the top floor. 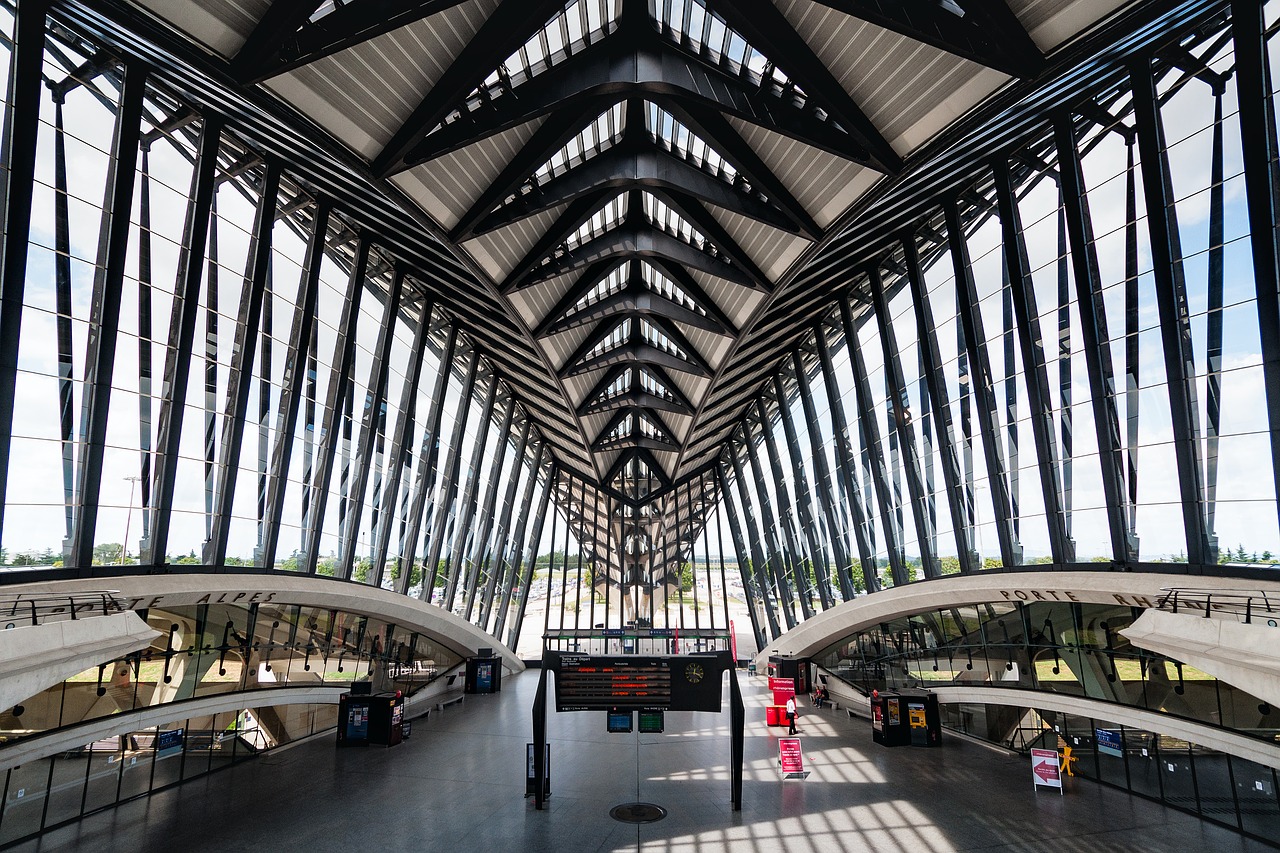 Previously known as Satolas, Lyon’s main airport was opened in 1975. In 1994, once the high-speed TGV train service was added to the airport, the new train station was added featuring what’s today the airport’s most recognizable feature, the fan-shaped canopy designed by Santiagi Calatrava. The extremely interesting design is inspired from a flying bird. 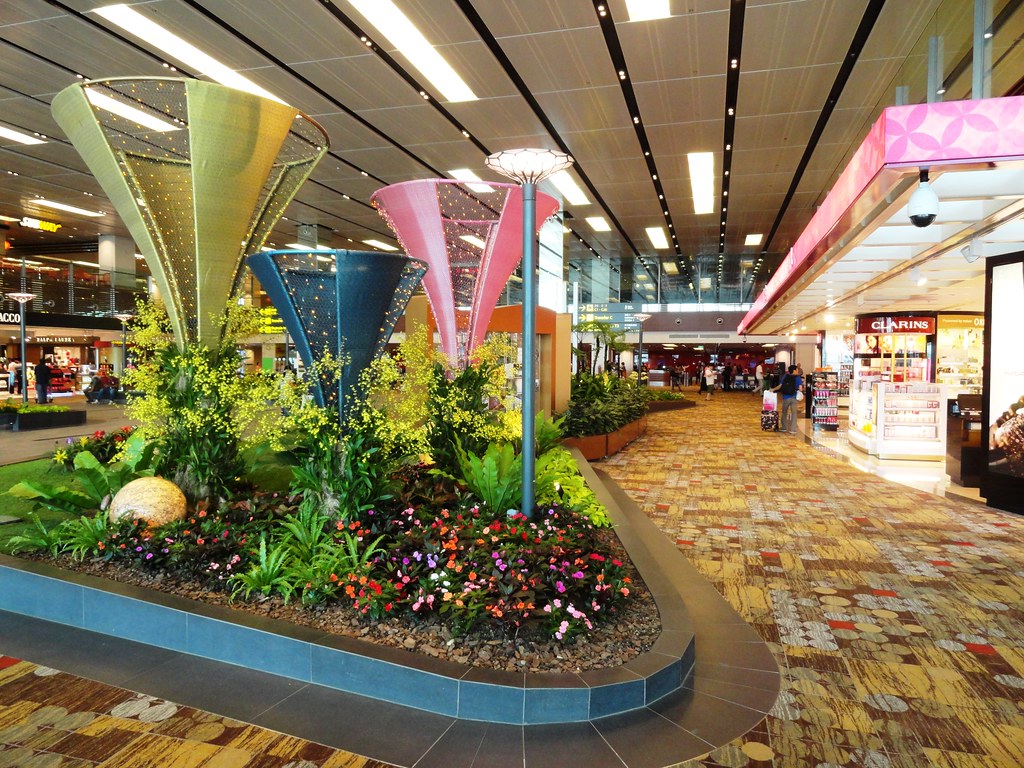 Starting with 2000, the airport went through an ambitious expansion process with a third terminal being added. In some places, the airport looks like a giant botanical garden, a wide variety of plants and trees being brought here to create a relaxing environment for passengers. Located almost 11 miles away from Changi the airport won almost 400 awards since 1981, being rated as one of the world’s best airports.

Located 4 miles away from Morocco’s capital Marrakech, the Menara airport was used in World War II by the U.S. Air Force as a hub for transporting cargo and personnel. Today, the airport features two modern passenger terminals whose design combines modern style with traditional Islamic architecture. Glass and marble were used for the interior, while the decorations feature traditional Arab elements. 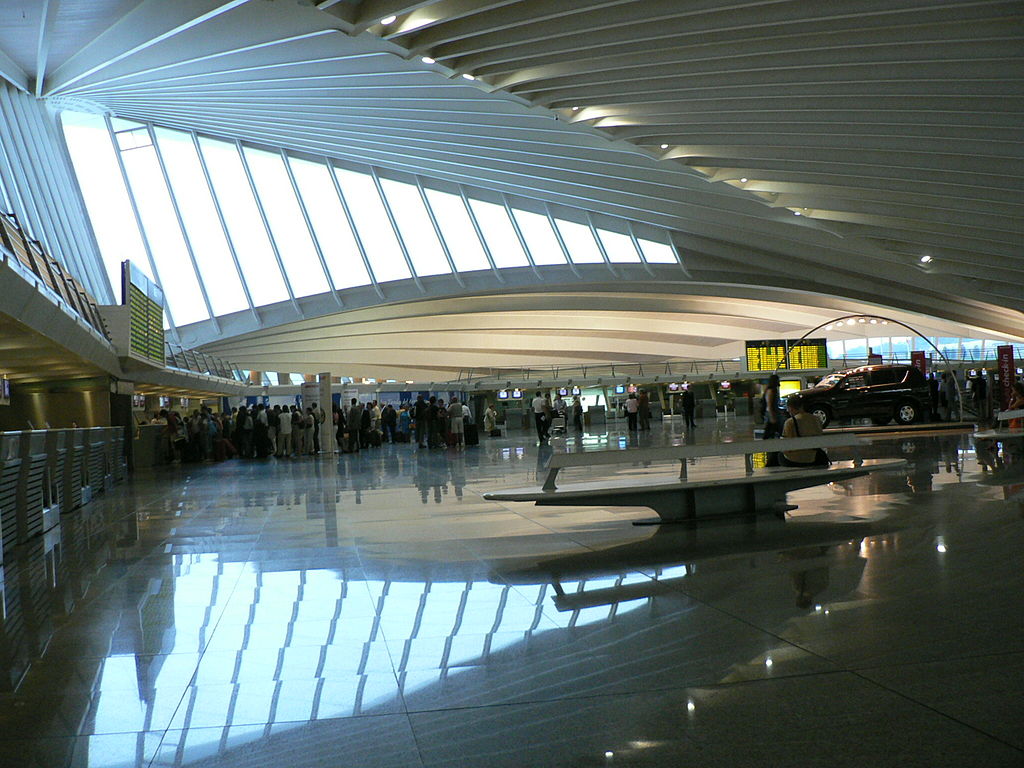 The airport was built in 1948, but today is famous for its new passenger terminal that was inaugurated in 2000 and was designed by famous architect Santiago Calatrava (the design’s “wings” brought it “The Dove” nickname). The total investment for the terminal was $39 million and the airport serves the Spanish city of Bilbao, which is 6 miles away. 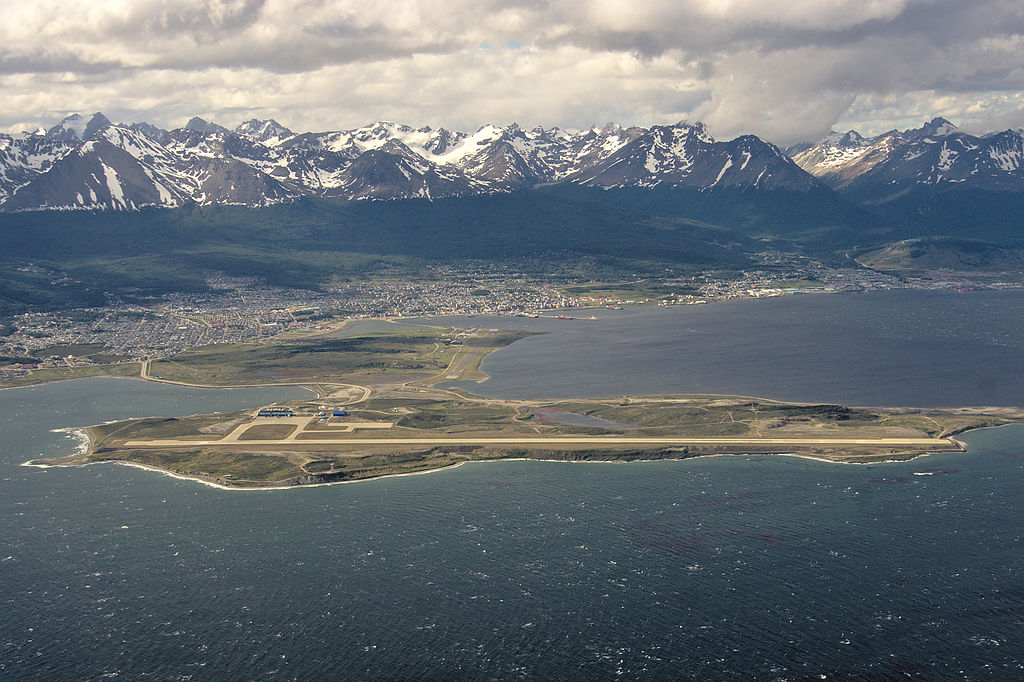 Unlike most airports in this article, this airport doesn’t impress with its size, its architecture or its features, but more with its location, 3 miles south of Ushuaia, Argentina, commonly accepted as the world’s southernmost city. Located in the Tierra del Fuego archipelago, getting to Ushuaia by plane will let you enjoy breathtaking views and this makes this airport a true gem. And one more thing, the airport’s name is a clear suggestion of Argentina’s sovereignty claims over the long-disputed Falkland Islands. When flying in to Ushuaia, make sure you reserve your hotel in advance so you get the best deals and not worry once you have arrived. 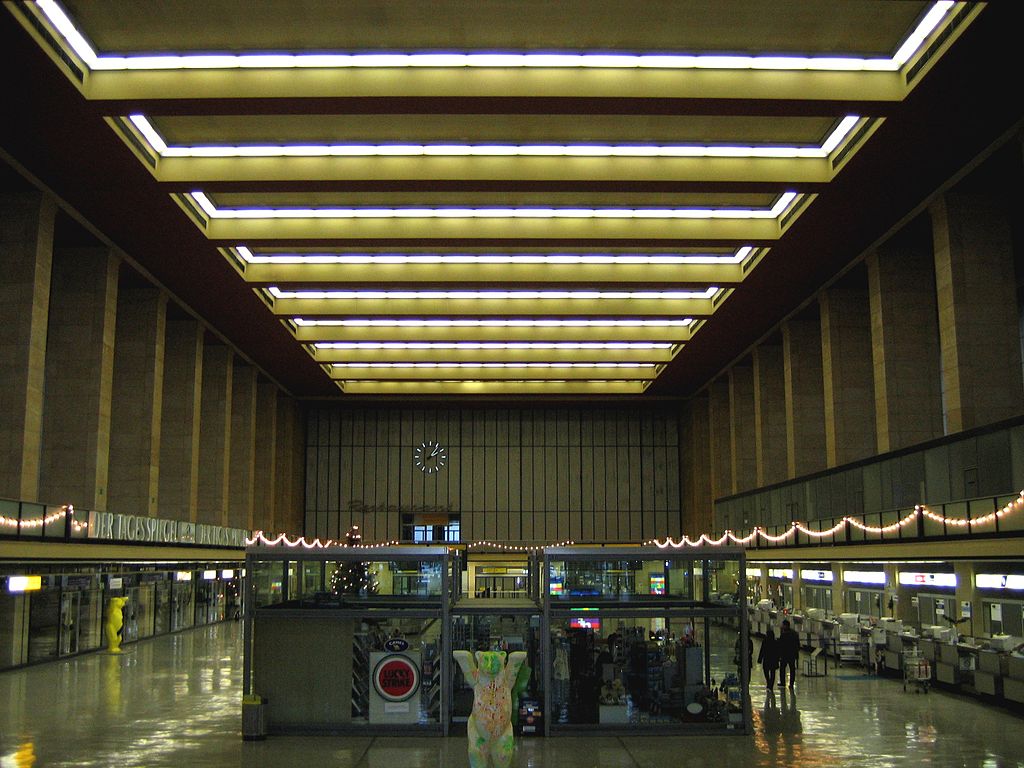 Even though all operations on Tempelhof were closed in 2008, this iconic airport makes this list because it’s one of the most important airports in aviation history. The old terminal was finished in 1927, was the first one to feature an underground railway and for a long time stood as one of the largest buildings in the world. After aircraft service was stopped, the area was used for plenty of fairs and events until 2010 when it was converted into Berlin’s largest public park, called Tempelhof Feld.