Amalfi Coast and Capri, the Pearls of the Mediterranean Sea

Besides the splendid landscapes offered by this region, what the Italians call the Costiera Amalfitana impresses with it architectural and artistic masterpieces that can be seen in the cities in this region and also with the inventive thinking of the people in the area that built their homes on the steep cliffs on the coast. This area’s beauty was also formally recognized by UNESCO, which included the Amalfi coast on the World Heritage list.

The Amalfi Coast, together with the Capri island located right next to the Sorrentine peninsula, is one of the most popular destinations for tourists visiting Italy. And there are plenty you can see here: countless artistic monuments created centuries ago, wonders of the ancient world, spectacular landscapes, splendid beaches and, of course, the world famous Italian cuisine. 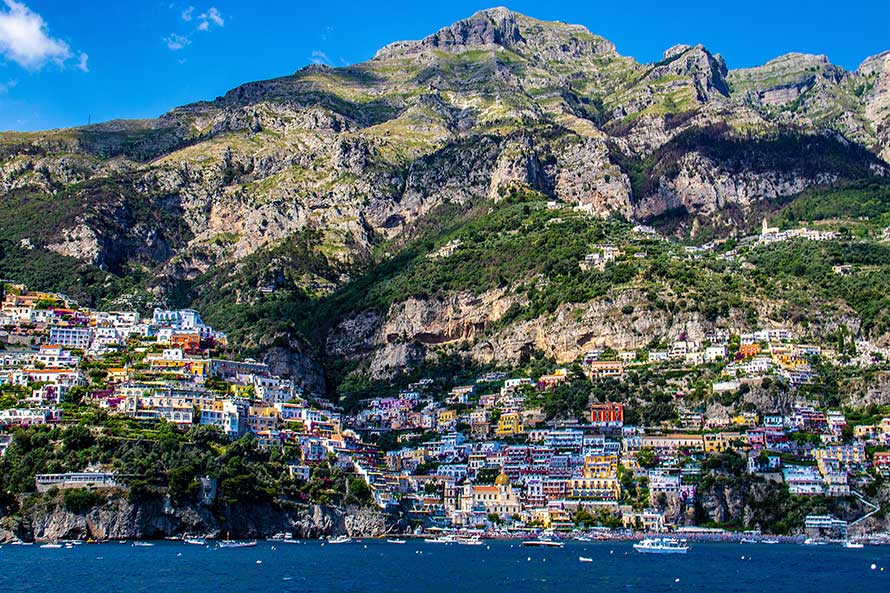 Only a few miles away from Naples, Sorrento is the closest city on the Amalfi Coast and it has a history spreading on more than 2,000 years. And while Naples is the largest city in the area, also having an international airport, Sorrento is definitely the start point for your adventure on the Amalfi Coast, because it lacks Naples’ urban chaos.

Sorrento, the beginning of an adventure

Sorrento became an ideal relaxing destination several centuries ago when people were impressed by its narrow streets from downtown (a mirror of the ancient Roman city of Surrentum) and by its old buildings. Among famous people that visited and praised Sorrento were Goethe and Casanova. The town is also an ideal location for a “passeggiata”, a name given by locals to the evening walk, before dinner. Whether you’d like to visit the Tramontano hotel, where Henrik Ibsen wrote one of his plays, the Villa Comunale park or you’d just like to feel the atmosphere of Corso Italia (it closes for cars after 7 p.m.), you’ll definitely enjoy the experience! 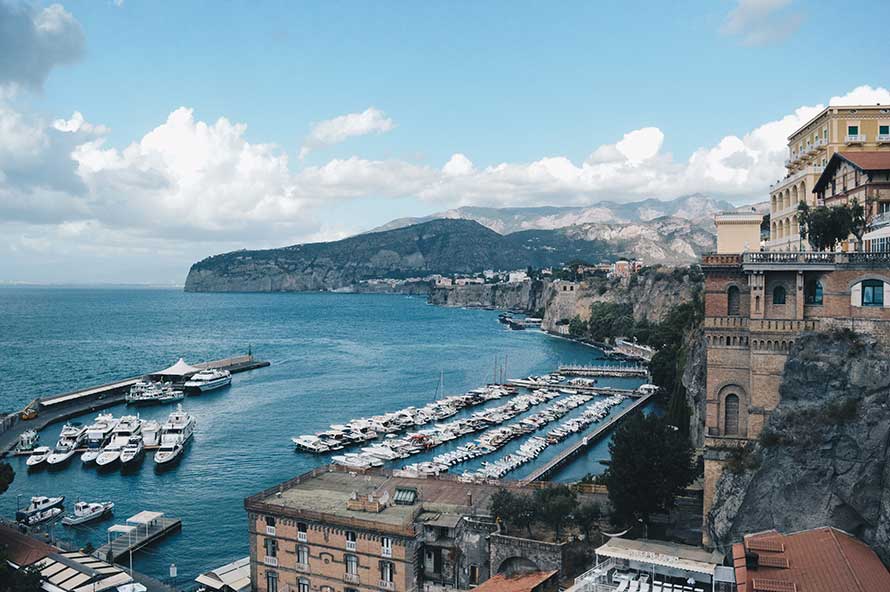 And you must not leave the town without enjoying a glass of “limoncello”, a tradition liquor made from the peel of the lemons that grow in this area. But you must be careful because the drink has at least 35 percent alcohol, so drink responsibly. The best time to drink a limoncello is in the evening, after a great dinner at one of the many restaurants offering a beautiful view over the bay, the Vesuvius volcano, the Capri island or Naples.

Capri, the favorite destination of the rich and famous

If you want to visit the island of Capri, the best place to start your journey is Sorrento, which is the closest port. A trip with a hydrofoil boat takes 25 minutes and costs around 13 Euros ($20).
A popular destination for important people, ever since the Roman age, Capri is considered by many as one of the most beautiful islands in the Mediterranean Sea. It has always been like a magnet for celebrities, being visited by people like Claude Debussy, Thomas Mann, Pablo Neruda, Somerset Maugham, and even Vladimir Lenin, who visited Maxim Gorky in 1908 and said that “Capri makes you forget everything and everyone”.

Once you get to the island, you can take a funicular (a sort of cable railway) to get to the main city, Capri, where you can stop for a cappuccino in the famous Umberto I plaza. If you’re not visiting Capri in the high season, when the island is overpopulated, you might get the chance and see one of the many celebrities owning a property on the island.

Capri is worth exploring by foot, countless trails giving you the chance to see the island’s beautiful landscapes and the ruins of the Roman leaders’ villas, at the same time avoiding the large groups of tourists. However, if you prefer comfort, you can always take the bus to Anacapri, where you can use the chairlift to get to Mount Solaro, the highest point of the island, which offers a breathtaking view. 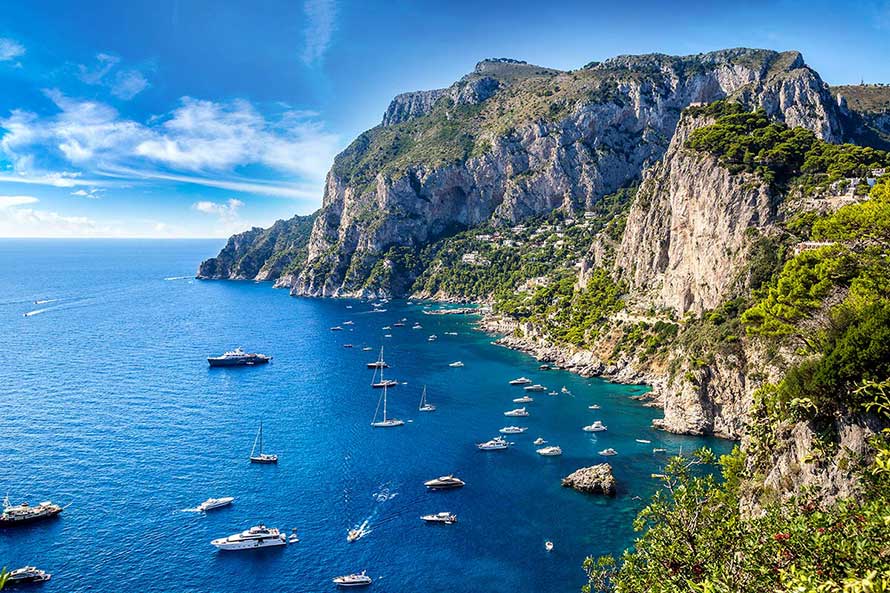 On your way down, make sure you don’t miss the Villa San Michele, built at the beginning of the 20th century on the ruins of Emperor Tiberius’ residence. Today, this villa is a major tourist attraction, being famous for its beautiful gardens decorated with ancient artworks and also for its view of the bay.

In order to visit all the important attraction on Capri you’ll need at least two days and, if you ask me, you must spend the night on the island (especially with almost all of the tourists leaving the island in the evening). On the second day, you can go to the Grotta Azzurra, a famous marine cave considered by many a symbol of the island. The sunlight is reflected in the sand on the bottom of the cave, giving the water an intense and unique blue color. 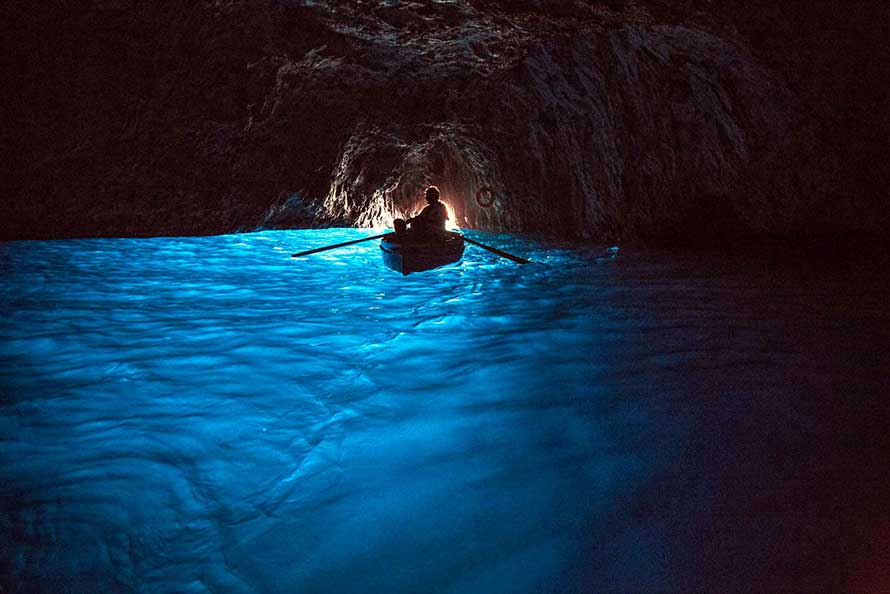 Another symbol of the Capri island is the Faraglioni rock formation, one of the rocks being the home of a rare species of blue lizard that isn’t found anywhere else on Earth.

From Sorrento to the Amalfi Coast

Once your journey to Capri ends, you can start your adventure on the Amalfi Coast. If you want to do it by car, Sorrento is the start point of SS 145, the shortest road to Positano, the first city on the Amalfi Coast. Near Positano, the road is connected to SS 163, called the Nastro Azzuro (“blue ribbon”) by the locals, a road carved into the cliffs which lead to Vietri sul Mare, the end of the coast. Because it offers amazing views of the area, the SS 163 is considered one of the most beautiful roads in Europe, which also means it can get pretty crowded in high season.

If you don’t want to drive but still want to enjoy the landscape, you can try taking one of the local buses, called SITA, which connect Sorrento to Positano. To avoid crowds, try not to go there in the summer or in September. Also, if your wallet allows you, another great way to see the Amalfi Coast is to rent one of the many private boats in the area.

Like I said, the first stop is Positano, a small village with less than 4,000 inhabitants. In the ‘50s, it was pretty poor, with a large part of the villagers being fishermen. However, it all changed once John Steinbeck made this location popular. In 1953, he described Positano as “a dream location that doesn’t seem real until you get there, but which becomes real and tempting once you leave”. It was the moment when more and more tourists started visiting the village and today tourism is Positano’s main income source. What’s impressive is that, despite a large number of tourists, the village keeps its vibrant personality and it continues to impress through its houses built on the steep cliffs, the narrows streets and the inclined stairways connecting them. 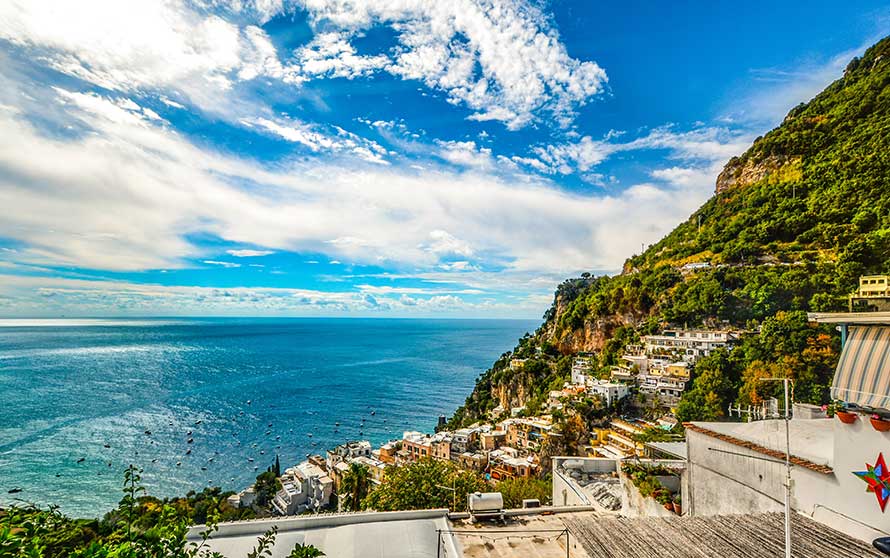 If you find Positano too crowded or expensive, you can continue your trip on the Amalfi Coast and you’ll discover Praiano, a fishermen village with an incredible history. A key attraction is the San Luca church, which was built in 1123 and where you can admire paintings from the 16th century. 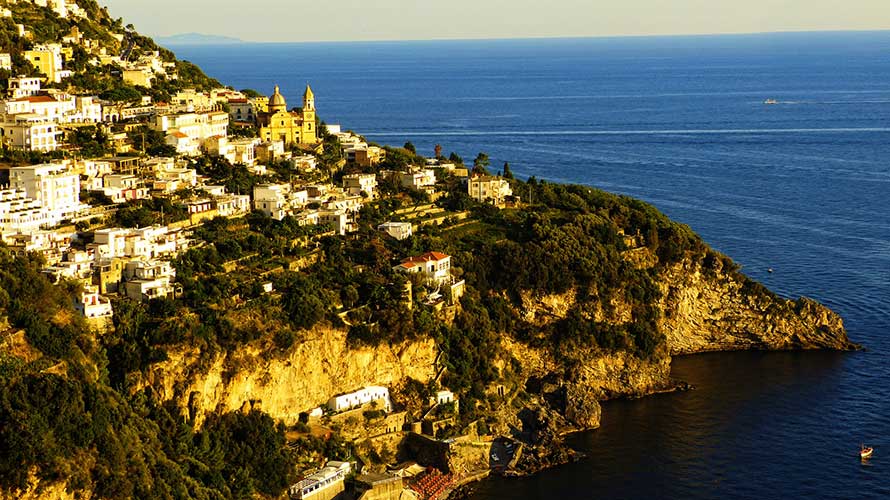 Conca dei Marini is another village on the coast, best known for its Grotta dello Smeraldo (The Emerald Cave), a spectacular cave where the stalactites and stalagmites are beautifully reflected in the green water, color given by the light entering the cave through an underground crevasse. To get to this cave, you’ll need to get down using an elevator and once you get there, you can explore it by boat.

The next stop is the largest city on the coast and also the one that gave it its name, Amalfi. Between the 9th and the 12th century, here there was an important republic with more than 60,000 citizens, that controlled trade on the Tyrrhenian Sea. Today, only 5,345 people live here and every year there’s the Regata Storica delle Antiche Repubbliche Marinare, where former naval powers Amalfi, Genoa, Pisa, and Venice compete in a boat race. The Amalfi Dome, built in the 9th century, is the town’s most important monument, its bronze gates being cast in Constantinople around 1000 AD and being the oldest gates of a church in Italy. 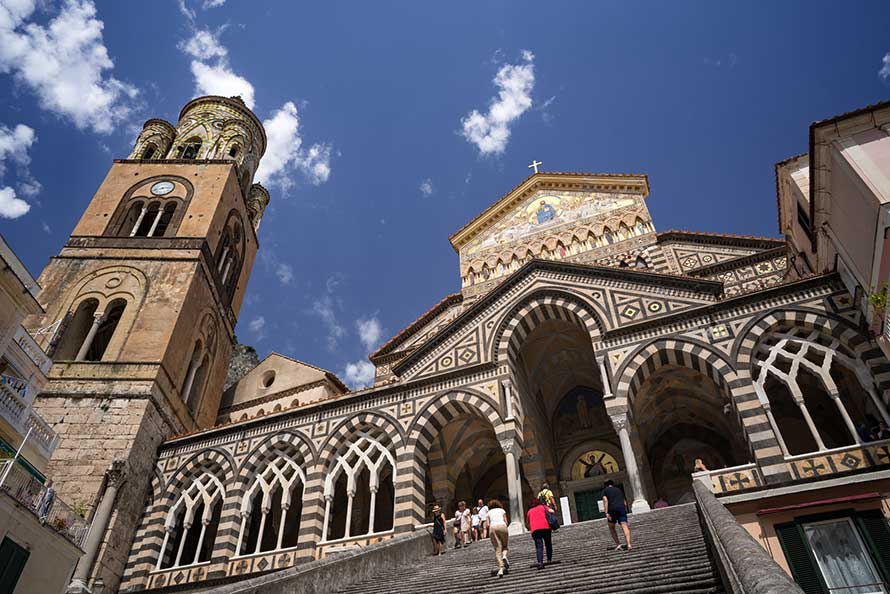 Because the area grew thanks to trading with different civilizations, the Amalfi architecture bears a strong Moor influence and the best place to see this is Ravello. Over the years, many artists, composers or writers stayed in this quiet village, including Andre Gide, Joan Miro, Truman Capote, Tennessee Williams, Graham Greene or Leonard Bernstein.

The Ravello cathedral dates all the way back to 1086 and its bronze gates were also cast in Constantinople, just like the ones in Amalfi, but around 1179. Another important attraction is the Villa Rufolo, built in the 13th century and restored in the 19th century, which was mentioned by Boccaccio in the Decameron and which also inspired Wagner to compose the second act of Parsifal.

Another famous building in Ravello is the Villa Cimbrone, built in the 11th century and restored in the 19th century by English politician Ernest Beckett (later known as Lord Grimthorpe), which turned its garden into one of the most beautiful in Italy. While being the property of the Beckett family, Villa Cimbrone was visited by many celebrities, including Virginia Woolf, John Maynard Keynes, D.H. Lawrence, T.S. Elliot, Jean Piaget or Winston Churchill. American writer Gore Vidal, asked in an interview about the most beautiful place he had seen during his travel, said that nothing can be compared to “the view I saw on a bright winter day, sitting on the belvedere of the Villa Cimbrone, when the sky and the sea were each so vividly blue it was impossible to tell them apart”. Today, Villa Cimbrone is a luxury hotel, but the gardens and the belvedere (which offer an amazing view of the Salerno Bay) are open to visitors. 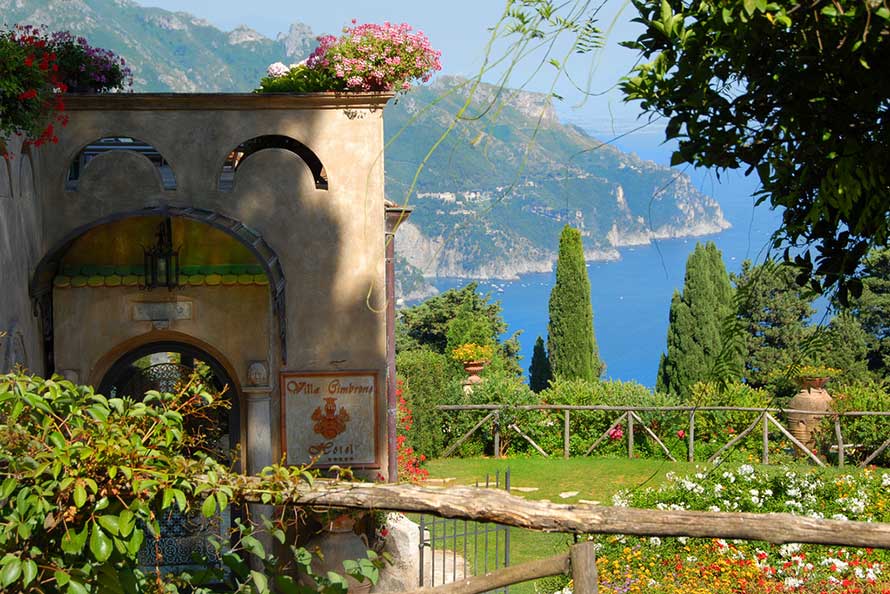 The Amalfi Coast ends with Vietri sul Mare, a place famous for the ceramic pottery created by the local artisans. Also, ceramic artwork can be spotted all over the village, decorating the San Giovanni church’s dome (built in 1732) and the other buildings, plazas, and streets.

The last stop of the journey will be Salerno, one of the largest cities in the Campania region, which is right next to Vietri sul Mare. Here you can see the many medieval buildings in the old center and also the Arechi Castle, which stands 863 meters above the town.

To get back to Naples, you can use the A3 highway or one of the many trains leaving Salerno for Naples every 30 minutes. The trip takes around 50 minutes, enough time for you to recap all the beautiful things you have just seen on one of Italy’s most popular coasts.

No matter how much time you’ll spend on the Amalfi Coast, you’ll soon realize it wasn’t enough. This region is known to have an irresistible attraction. And if before your trip you were wondering what made all these celebrities love this location, after you’ll definitely get your answer.