The oldest surviving sovereign state in the world, founded on September 3, 301 AD, San Marino is also the smallest independent state, with a total surface of only 24 square miles (61 square km). The state is located around the 2,460-ft high (750 meters) Monte Titano cliff and its surrounding hills. From its 30,000 inhabitants, only 4,500 live in the capital, the City of San Marino, located on the south-western side of Monte Titano, from where a beautiful perspective of the Apennine Mountains opens up.

Around the beautiful shining white limestone mountain, several hills, home of the other eight settlements from the Republic of San Marino, offer a splendid view. According to the legend, during the 4th century, a stonemason named Marinus came to Rab, an island on the Dalmatic shore of the Adriatic Sea, to work on the Rimini port construction and to flee the Christian persecution during the reign of Roman emperor Diocletian. Soon he was named a Deacon by the Bishop of Rimini, but he had to seek shelter on the steep cliffs of Monte Titano after facing several false accusations. Later on, the Christian-converted Roman patrician Donna Felicissima offered him the cliff as a gift. Before he died, in the winter of 366, Marinus’ last words were “Relinquo vos liberos ab utroque homine” (“I leave you free from both men”), words that even today inspire the local people. 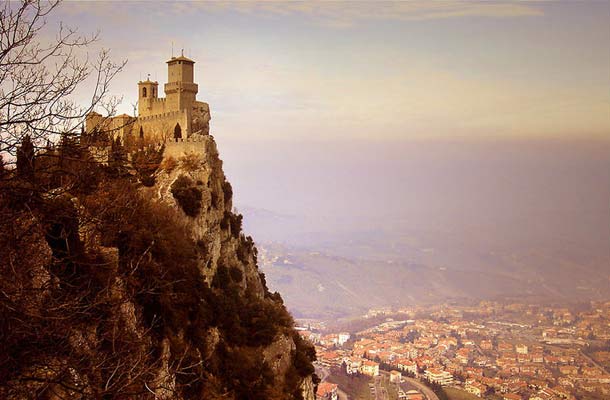 During the 10th century, the first fortifications are built to protect the community’s freedom, fortifications which were never conquered by enemies. After the state becomes a republic in 1263, the first laws are written by the Aregno (the family heads council), some of these laws still being in use. During its history, San Marino resisted against all subordination attempts by popes, kings or noblemen, which made Napolean decide that this state should be protected, as a symbol of freedom. He also was the first ruler to send an ambassador to San Marino, the famous mathematician Monge and soon after that the republic’s independence was officially recognized at the Congress of Vienna in 1815. Today, the republic is led by a Captains Regent, chosen for a period of only 6 months.

San Marino’s coat of arms depicts a crown, symbolizing the republic’s sovereignty, three towers and the word “Libertas” (Latin for “Freedom”). The three towers are the three important citadels in San Marino, Guaita, Cesta and Montale, so this would be a pretty good reason to visit these three landmarks on the Monte Titano during your trip through San Marino. If you get there during the peak season, you might have some difficulties finding a parking spot in the area and after you do, you will have to walk some really steep and narrow streets, so be prepared for a significant effort.

The first tower and the most famous one, La Guaita, which we also included on our most beautiful castles in Europe list, dates all the way back to the 10th century and features two interior courts. The tower used to be a prison until 1960, while today it’s the home of a history gallery, with all sorts of exhibits showing the towers’ history and the restoration stages.

The second tower, Cesta, also called Fratta, was built in the second part of the 13th century, on the highest point of the limestone cliff and it hosts a very interesting “Museum of Ancient Arms”, with more than 700 armor and weapons exhibits. A must see! 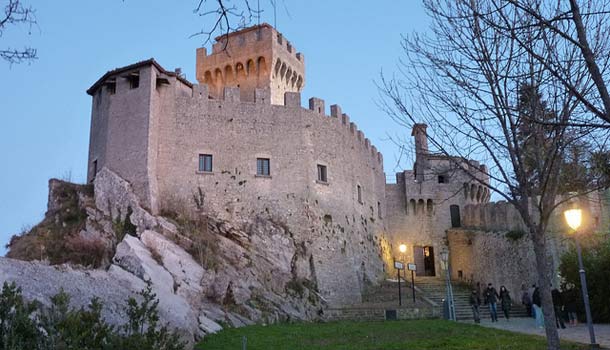 The third tower, called Montale, was built later, in the 14th century and it served as protection for the other two towers. Unfortunately, the Montale is not open to the public, but its location is splendid, so you will definitely get some great photos.

But that’s not all you can do on Monte Titano, because there are also plenty of medieval-themed restaurants, an Aquarium with lots of species of fish and reptiles, a Museum of Torture and a Picture Gallery (or a Pinacoteca), where medieval-themed dinners are organized and extremely valuable stamps are issued.

But that’s not all you can do and see in San Marino, because there are also other places loaded with history, such as the Palazzo Pubblico (the town hall), the Cathedral of San Marino, the State Museum, the San Francesco Museum and the Piazza della Liberta (Liberty Square) with a beautiful Statua della Liberta (Statue of Liberty). Not to mention just walking the small medieval alleys or having a drink at a scenic terrace will definitely make it worth. 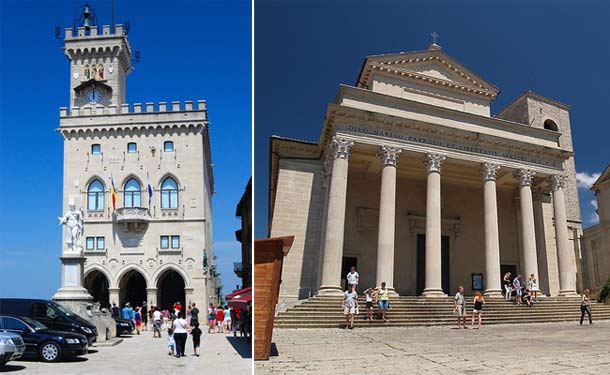 The Palazzo Pubblico and the Cathedral of San Marino. Photos by Bart Hanlon and Jan Kromer

And if you go to San Marino, don’t limit your visit to the capital city because the other “castelli” are also beautiful, especially Borgo Maggiore, very popular among the more than 2 million people that visit San Marino each year.

As for accommodation, depending on the season, you should find a decent hotel at around 60 or 70 Euros ($80-$100) per night. To find a hotel in San Marino click here.