With its 12,389 ft (3,776 meters), Fuji Yama, also known as Fuji San, is Japan’s highest mountain. The isolated and symmetrical silhouette doesn’t seem to hide a sleeping monster, like local legends tell, but it is considered a spiritual home and Japan’s most beloved symbol.

On a late August day, around 6 a.m. we took the subway towards the Yaesu Fujiya Hotel, from where our one day trip to Mount Fuji started. After we slowly crossed the crowded Tokyo, going past Ginza and the Imperial Palace, we got to the highway that leads to the south-western part of the city, around 11 o’clock, in a bus filled with Americans, Canadians and Europeans. 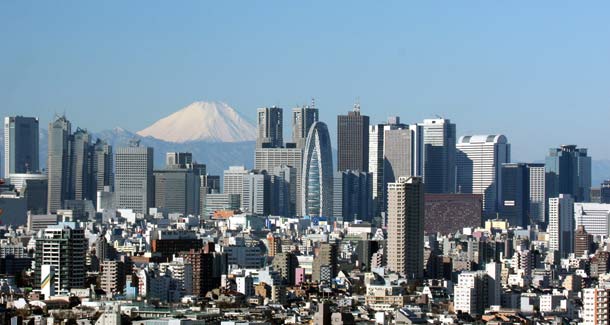 After we leave the Tokyo Prefecture, we go South through the Kanagawa Prefecture, on the Tokyo-Yokohama-Odawara highway, around the Sagami Gulf we end up in the Kanto Plain, Japan’s most important agricultural area. Between Tokyo and Yokohama, the urban landscape is almost continuous, a natural thing considering we are in the heart of the Tokaido corridor, the most crowded megalopolis in the world.

After that, on both sides of the highway, the farming landscape is dominated by maize crops which are harvested once per year, unlike the ones in Southern Japan which are harvested twice per year. We are told that the large maize crops are fully automated, while manual labor is still used only in smaller ones. Of course, compared to the huge crops in China or the United States, even the largest crops is Japan seem tiny.

After a while, the highway runs parallel with the Pacific Ocean and the people which are in a greater hurry than us use the Tokaido Shinkansen, which runs at a maximum speed of 186 mph (300 km/h) on the Tokyo – Yokohama – Kyoto route. The elegant silhouette “flies” on an almost curveless track and is one of Japan’s greatest technology, making everybody proud of it. 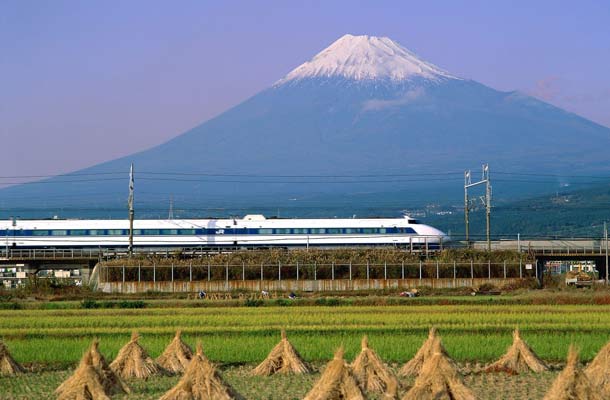 The Tokaido Shinkansen and maize crops with Mount Fuji in the background.

We leave the Shinkansen at Odawara, a city built in the 12th century as a fortified citadel that also acted as an important mailing point on the road connecting Tokyo (or Edo, as it was called in those days) to Kyoto. Then we head East, going through a rocky area with plenty of famous resorts and then we enter the Fuji-Hakone-Izu National Park, where we make short stop at the Highland Resort Hotel. Here we can see plenty of maps of the region, some of them painted on wood and we get to spend some money in several beautiful souvenir shops.

From here, we go through an area with tea plantations and large golf courses, a sport becoming more and more popular among Japanese businessmen, a lot of restaurants serving the famous sake drink and temples from different historical periods. Across the street from the Ferrari Museum we enter the Buddhist temple there. A white gate allows access to a splendid garden, but that’s as far as you’re going to get, because you can look only from the outside in the beautiful temple featuring plenty of art objects with gold and precious stones, wooden statues and leather creations. 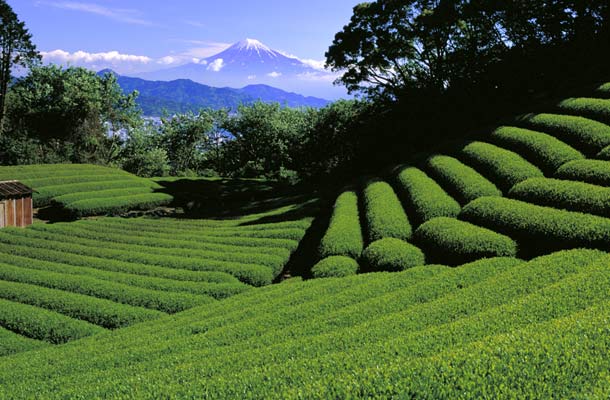 The largest and most visited protected area in Japan, the national park includes Mount Fuji with its surrounding area, The 5 Fuji Lakes, hot springs and specific vegetation and animals. It is a placed blessed with beautiful landscapes, including plenty of water and the lakes, of which Kawaguchi is the largest, beautifully reflect the volcanoes’.

Last time Fuji erupted was on January 22, 1708 and the mountain’s famous symmetry was “disturbed” by the formation of a secondary crater on the North-Western side, which sprayed a 1.5 ft (50cm) volcanic ash layer on the Edo capital, which was 60 miles away. The main cone is made of around 100 secondary cones, with ring-shaped craters at altitudes between 4,900 and 6,200 ft. (1,500-1,900 meters). Between the central summit and these craters, the water had formed an amazing network of lakes, the best known being the ones called The 5 Fuji Lakes: Kawaguchi, Yamanaka, Sai, Motosu and Shoji.

As we get close to the mountain, we are told several geological and geographical facts, illustrated with sketches about how the volcano was created. The legend says that it took only one night for the Mount Fuji to rise, in 286 BC, through the incredible efforts of a popular Japanese hero. In reality, the mountain is more than 10,000 years old and its conic shape is the result of an eruption that took place around 5,000 years ago. There are also lots of legends surrounding the mountain, which makes it the most important symbol of the Japanese people. 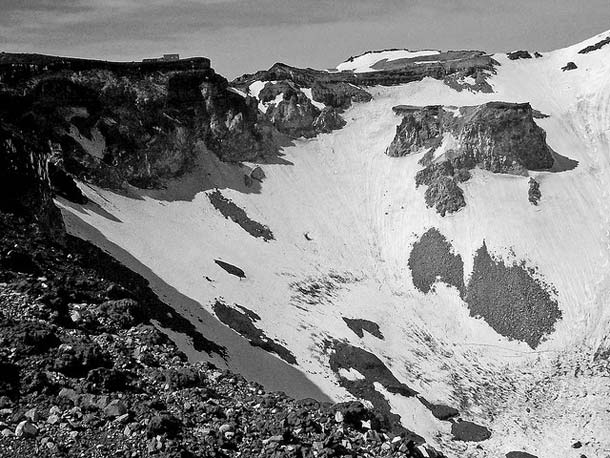 The crater on the summit of Mount Fuji. Photo by bertrudestein.

There are plenty of labels this mountain has received throughout time: the most climbed mountain in the world, the most photographed, the most popular landmark, etc. But what is most certain is that Mount Fuji is the most used inspiration source for Japanese writers and poems, ever since ancient times and what’s also certain is that the postcards depicting the mountain are instantly recognized all over the world. And this is why most of the souvenirs from Japan have an image of Mount Fuji.

Considered a sacred mountain, countless temples, pagodas and places of prayer were built around it. Thousands of believers climb the mountain every year, as part of religious practices, hoping to reach the top and to see the absolutely amazing sunrise from the Pacific reflected in the lakes. Climbing to the top is not an easy hike and an ancient Japanese proverb says “Whoever climbed Mount Fuji once is a brave man, who did it twice is mad!”. Popular belief banned women from climbing the mountain but this situation was over when Lady Parkes, the British Prime Minister’s wife climbed it in 1867.

Mount Fuji’s “opening” ceremony takes place every year on July 1 in all the temples from the mountain’s ground. Climbing is most popular in July and August, in several stages, and the season “closes” on August 31. During these two months, more than half a million people climb it, starting at evening, to get there just in time to see the magnificent sunrise.

The Owakudai Valley (an old volcanic crater) is very popular for its hot springs and for the steam getting out through the surface’s cracks. Stone buckets, where highly mineralized water boils also generate steam with a strong sulfur scent. When steam rises, it spreads across the entire mountain, significantly decreasing the visibility. Both tourists and local people use these natural resource for thermal spas and resorts in hotels and also for purifying, in special designated areas. Some local entrepreneurs sell eggs boiled in these waters (4 eggs cost around $6) and tourists especially appreciate this, because boiled this way, the eggs turn black.

Photos by End of Summer and eugene.

Even if after this you are extremely tired, a journey to Mount Fuji is definitely worth it and you’re trip to Japan would be somehow useless if you didn’t spare a day or two visiting it. So, have you been there? What were your impressions? We’d love to hear it in the comments below.