Although many consider eels as reptiles due to their resemblance to snakes, they are actually fish with long and thin scale-less bodies. There are several species and subspecies of eels that typically range from 4 inches to 3 feet in length, depending on their type. These different eels can be found in freshwater, belonging to the Anguillidae family, and saltwater, which fall under the Moninguidae family.

An interesting thing about eels is that the ones who reside in the deep sea are usually black or gray, while the eels found in tropical reefs have colorful patterns. You can find most of the eels in shallow waters of the ocean.

Here are the many types of eels you can find in the freshwater and saltwater:

Grey conger eels, also known as the Antillean congers, belong to the Congridae family. These eels are seawater fish, first discovered in the Atlantic Ocean in the 1800s. These days, they are mostly found in the oceans of Cuba, Jamaica, and northern South America. The head of a grey conger looks very similar to a catfish. These eels tend to come out at night to prey on finfish and other small fish to feed on.

The black-spotted eels, sometimes referred to as the tire track eels, fall under the Mastacembelidae family. These grey and brown colored freshwater fish are widely popular among the aquarists because of their zigzagged markings and patterns. The tire track eels are nocturnal animals, and they can live up to approximately 18 years. Even though they are omnivorous by nature, these eels can eat anything from worms and shrimp to underwater plants.

The giant moray eels are marine fish that belongs to the family of Muraeinidae. These eels are considered to be one of the gigantic moray eels. The young morays are mostly tan colored with black spots on them, while the older morays are mostly black with leopard-like markings on their body. These huge fish feed on small fish and crustaceans, and they are highly poisonous to human beings if they are consumed. 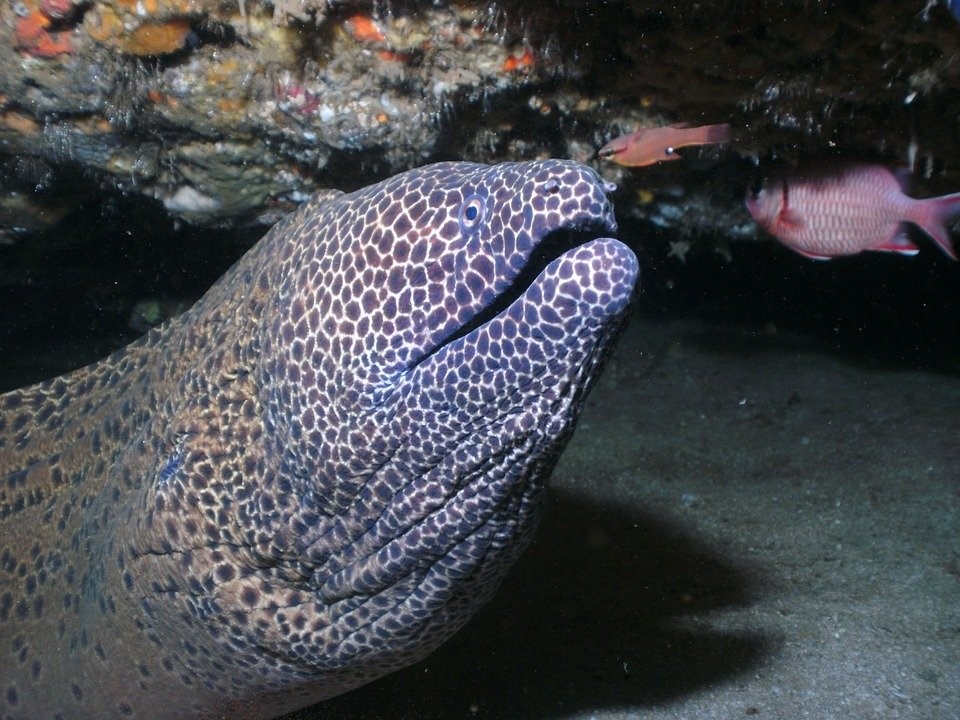 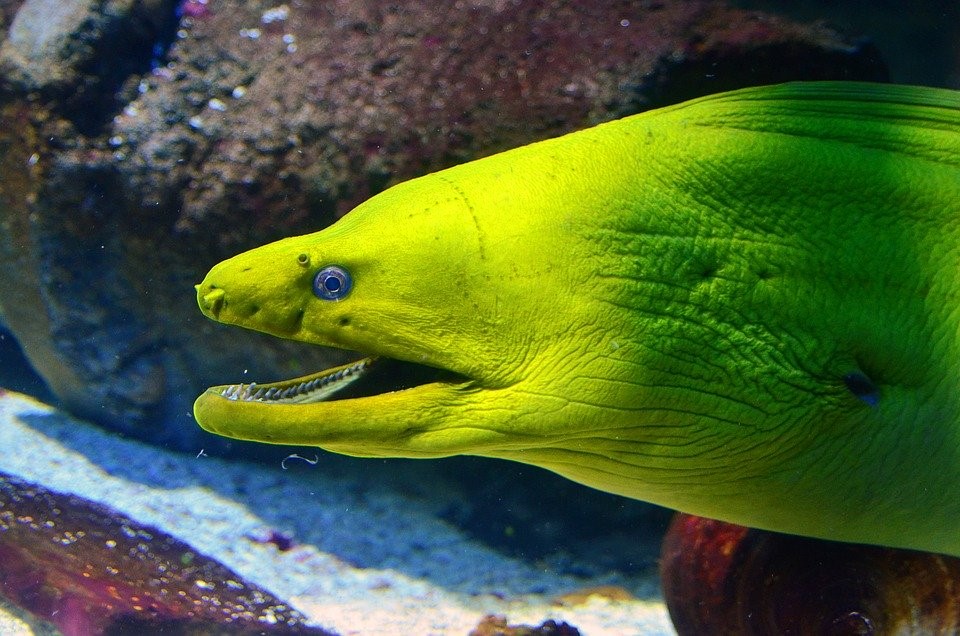 The mysterious electric eels are freshwater fish, found in small streams in South America. They differ from the other eels because of their tendency to electrify and paralyze their prey. These eels also need air to breathe, which is why they surface from the water every ten minutes. The electric eels have distinct green eyes and have a lifespan of almost fifteen to twenty years. An interesting thing about these eels is that even though they were discovered ages ago, scientists have still not learned a lot about them.

The fimbriated morays, also called the spot-face morays, are Muraenidae family eels. They are yellowish-green in color with dark-spotted patterns throughout their body. These eels are carnivorous animals who hunt at night time for small fish and crustaceans. The spot-face morays grow up to two and a half feet, and they are commonly spotted in the Indo-Pacific regions.

The wolf eels are seawater fish that fall under the Actinopterygii family. These fish mostly live in the North Pacific oceans. Despite their name, the wolf eels are one of the most reclusive, sedentary, and slow-moving fish compared to other types of eels. These fish have hearty appetites, and they typically feed on crabs and sea urchins.

The green moray eels are a part of the Muraenidae family, and they are mostly found in the northern Gulf and western Atlantic areas. These leaf-green colored fish grow up to approximately two and a half feet. The green morays are nocturnal animals with a lifespan of ten to forty years, mostly feeding on crabs, fish, and squids.

The spiny peacock eels are a marine fish that belongs to the family of Mastacembelidae. As suggested by the name, these eels have attractive, colorful patterns, making them a magnificent pet animal for aquariums. These fish live between eight to eighteen years, and usually grow no more than a foot long.

Zebra eels are marine fish belonging to the Muraenidae family. These eels have zebra-like black and white patterns, and they live in the Indo-Pacific area around the reefs and eastern coast of Africa. The zebra eels have a voracious diet that includes fish, squids, shrimps, and scallops. These eels are also known to be dangerous to humans as they tend to bite as a reflex defense mechanism.

Some Other Types of Eels

The smallest eel to be discovered is the eel loach, which can reach a maximum of five inches, while the largest eel is the European conger, which can grow up to a meter and a half.  There are several other eels found in the shallow waters, including the: