“The Shadow of the Wind” Locations in Barcelona 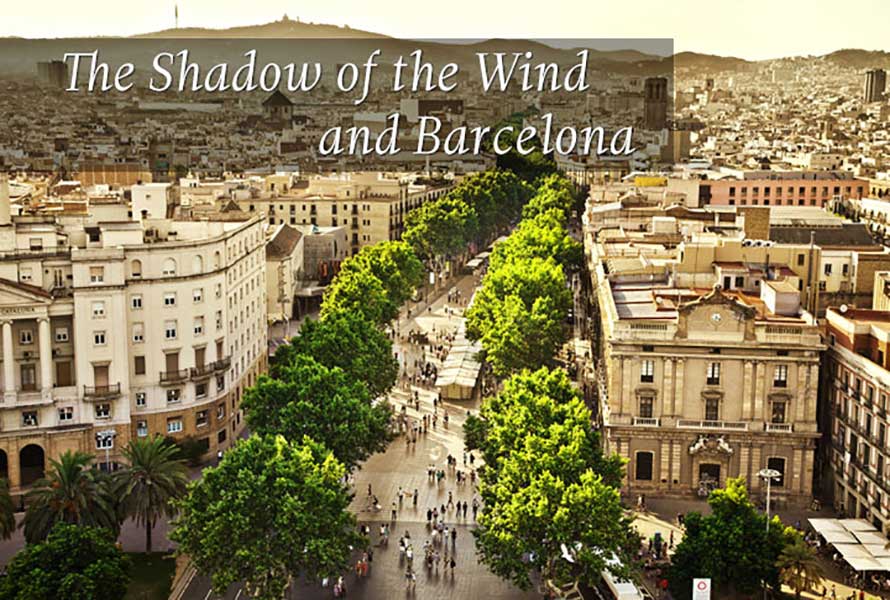 Earlier this month, I saw a good friend of mine posting a photo on Facebook of a new book she was reading, Into the wild by Jon Krakauer. I’ve read the book and seen the movie, so I was curious about her opinion on the book. She told me that she wasn’t exactly thrilled with it, but not because she didn’t like it, but because she was still under a spell from the previous book she had read. The Shadow of the Wind by Carlos Ruiz Zafon.

Unfortunately, I don’t read as much as I’d like to, and to my embarrassment, I didn’t know anything about the book or the author. But I got curious and after reading a little about it, I downloaded it to my kindle. Two days later, I finished it and was completely under Zafon’s spell. If you’re just like me, you’ve also probably fallen in love with the mystery in the books, the dark atmosphere and especially the amazing way he describes Barcelona. Right now I’m reading the second book in the “Cemetery of the Forgotten Books” series, The Angel’s Game, which is just as good as “The Shadow of the Wind” (though perhaps a little more “Hollywoodian”) and which takes place in the same beautiful city.

After finishing the book, I was extremely curious to see the locations he so beautifully described in the book, so here are some of the most important locations in Zafon’s book. And if you’re ever in Barcelona and loved “The Shadow of the Wind”, it would probably be a good idea to check them out. Since most of the action in the book takes place in the old city, the locations are within walking distance one from another. The area is also very touristy, so it’s really easy to get around. Anyway, let’s get going: 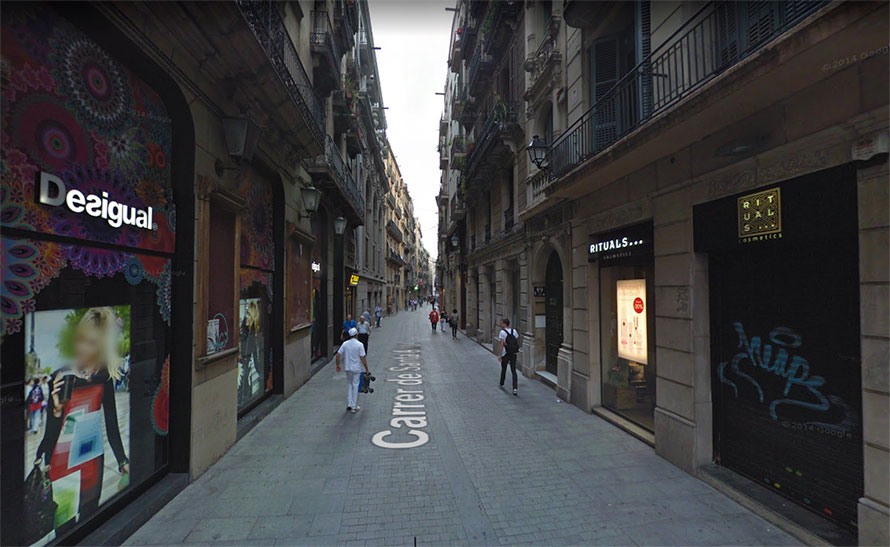 One of the most important locations in the book is Daniel Sempere and his father’s bookshop which is located on Calle Santa Ana (or Carrer de Santa Anna as you might probably find it on Google Maps). The street is right next to Placa de Catalunya, one of the most popular places in Barcelona, which can be reached by taking the Metro and getting down at the Catalunya station (the street is just 4 or 5 minutes away). The location is also quite important in Zafon’s following novels, The Angel’s Game and The Prisoner of Heaven. 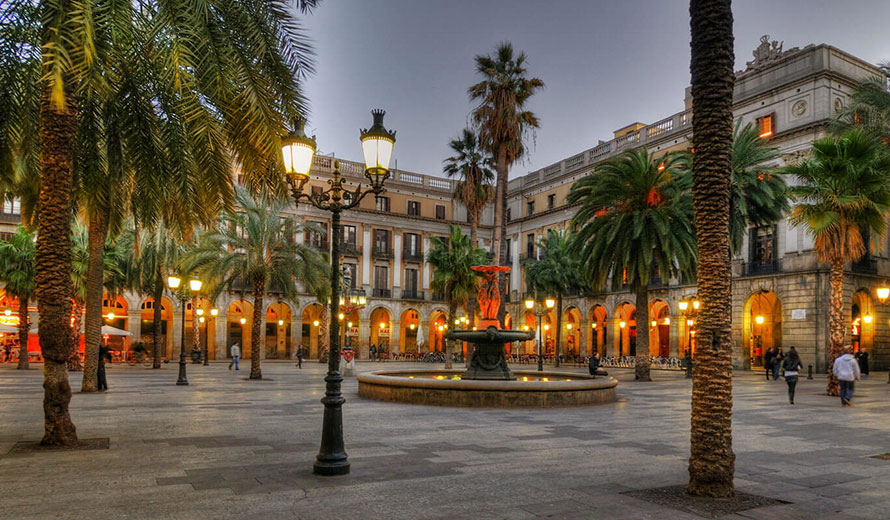 This is one of Barcelona’s most beautiful place and an important setting in The Shadow of the Wind. It’s where Don Gustavo Barcelo’s impressive apartment is located, where Daniel first sees Barcelo’s niece Clara. The plaza is also the place where Daniel meets Fermin for the first time, after getting his ass kicked by Adrian Neri, the piano teacher. The place is 10 minutes away from Carrer de Santa Anna and is right next to the Liceu metro station. Here is the location on Google Maps.

Cemetery of the Forgotten Books 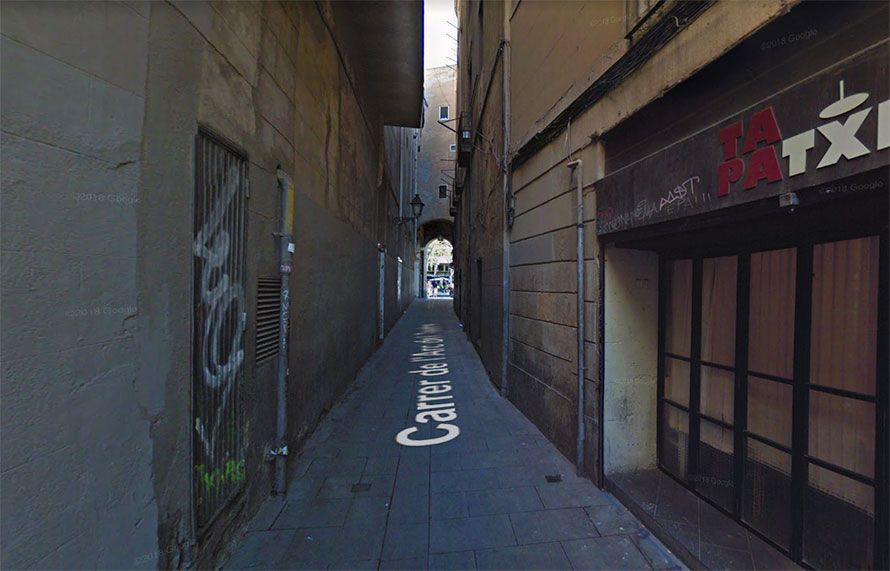 Another important location of The Shadow of the Wind is the Cemetery of the Forgotten Book, where Daniel is taken by his father at the beginning of the story. It’s where he chooses Julian Carax’s novel, which starts the amazing adventure. According to the book, the place is located somewhere on the Calle Arco del Teatro, which is only a few minutes away from Plaza Real. [Google Maps] 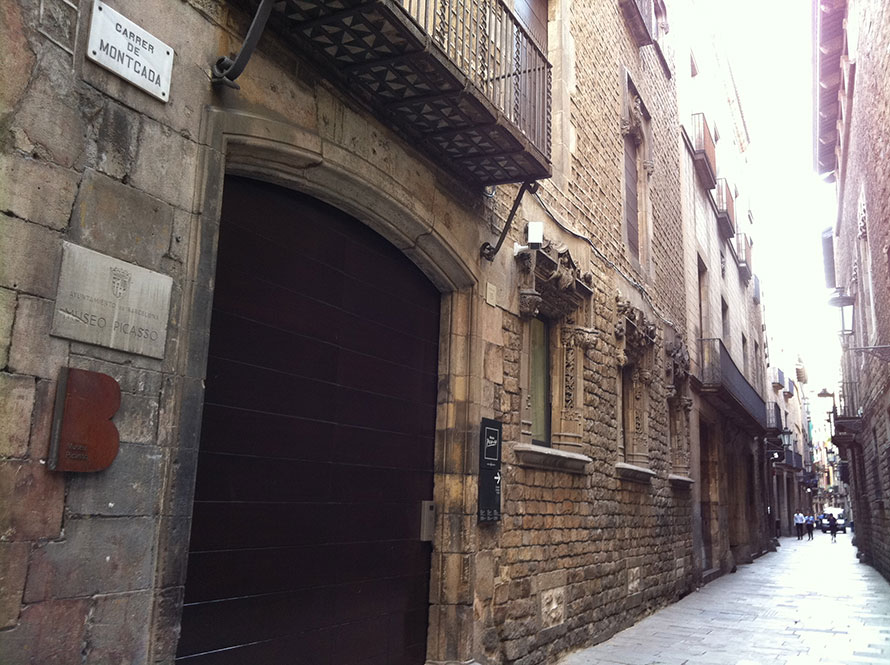 A lovely street located towards Parc de la Ciutadella, Carrer Montcada was the location that provided Zafon with the inspiration for the fictional Santa Lucia Hospice, where Daniel and Fermin talk to Jacinta Coronada, Penelope Aldaya’s former governess, who tells them the tragic love story of Penelope and Julian. On this street, you can also find the Picasso Museum and a beautiful location nearby is the Santa Maria del Mar church, which you might enjoy a lot. [Google Maps] 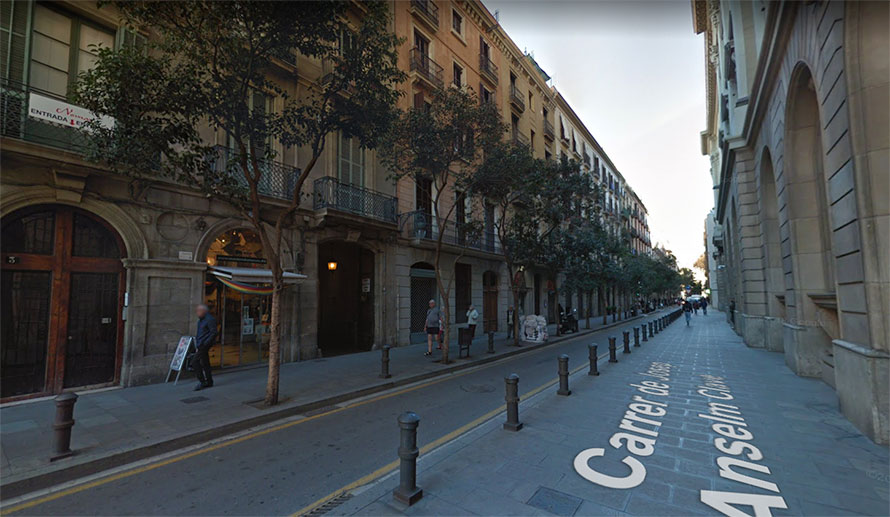 The fountain pen shop where Daniel is fascinated by the fancy Montblanc Meisterstuck black pen that supposedly belonged to Victor Hugo himself which he used to write Les Miserables. The fictional setting is located on the Carrer de Josep Anselm Clave, a nice street in the beautiful surroundings of Port Vell (the Old Harbour).

The Angel of Mist 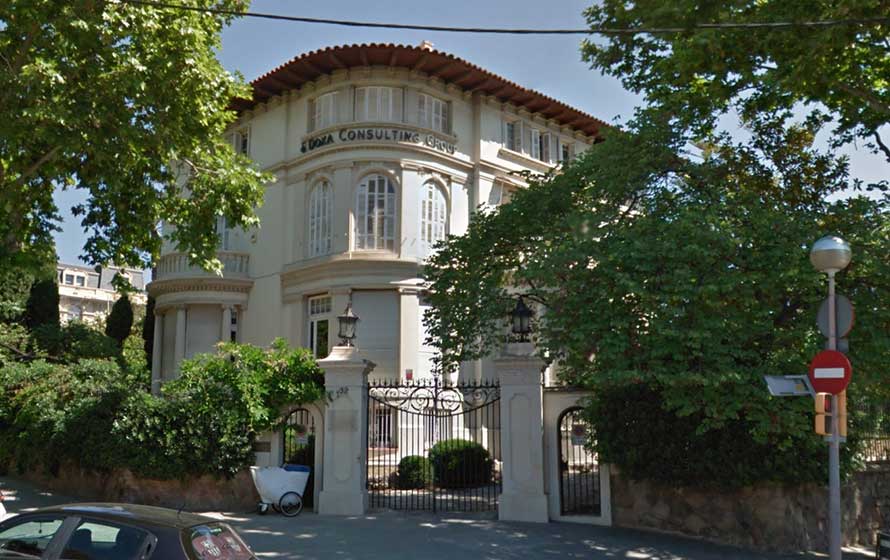 One of the most important settings in the book, The Angel of Mist was the residence of the Aldayas, bought by Jorge Aldaya in the early 1900s. It’s where Julian met Penelope for the first time and where the graves of Penelope and their child are located. According to The Shadow of the Wind, the house’s address is Avenida del Tibidabo, 32.

Unlike most of the other locations, this one is outside the Old Center, but it’s also in a beautiful part of Barcelona. After seeing some of the houses that inspired Zafon for the creepy Angel of Mist, you can take the famous blue tram (Funicular del Tibidabo) all the way up to the summit of Tibidabo mountain, which offers spectacular views of Barcelona. See how to get here on Google Maps. 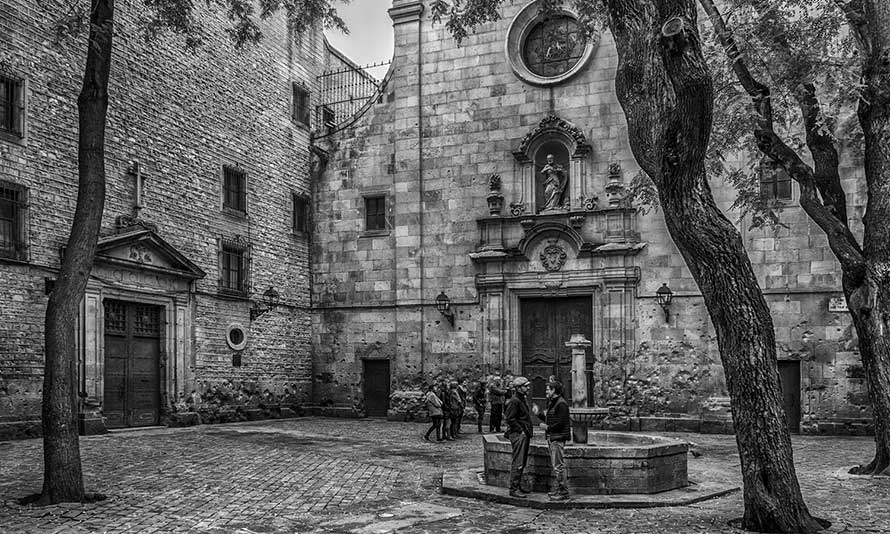 This is where Daniel goes to visit Nuria Munfort, one of the people who help him find out the story of Julian Carax. According to the book, she lived in a building by the entrance to the square. “Plaza de San Felipe Neri is like a small breathing space in the maze of streets that crisscross the Gothic quarter, hidden behind the old Roman walls”. Google Maps location here. 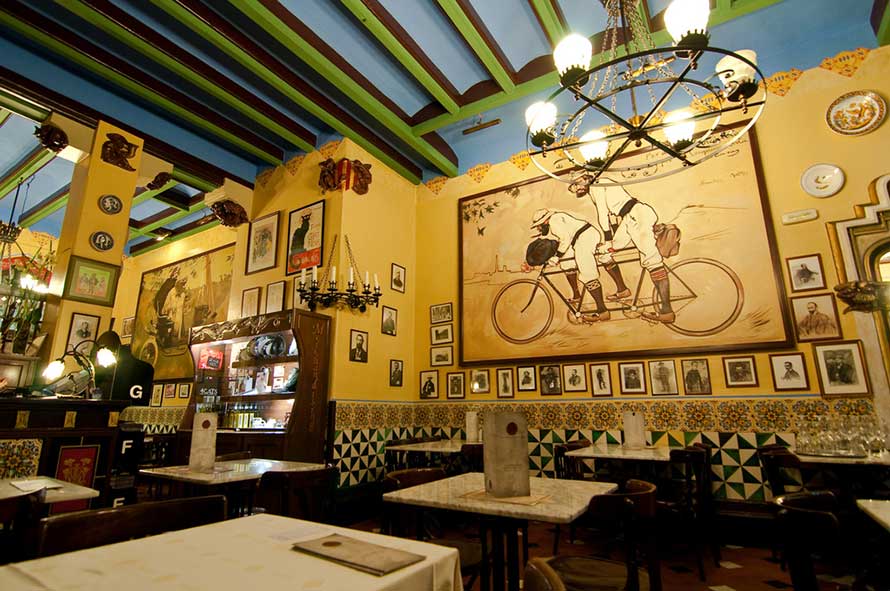 One of the few locations in the book that actually exist, the Els Quatre Gats is a beautiful restaurant inspired by the Le Chat Noir in Paris and designed by the architect Puig i Cadafalch. This is where Daniel and Fermin often dine. According to the restaurant’s website, it’s where more famous people used to eat, including Picasso, famous architect Gaudi or pianist and composer Isaac Albeniz. The place is located on Carrer de Montsio, 3, a couple of minutes away from Carrer de Santa Anna (official website is here). 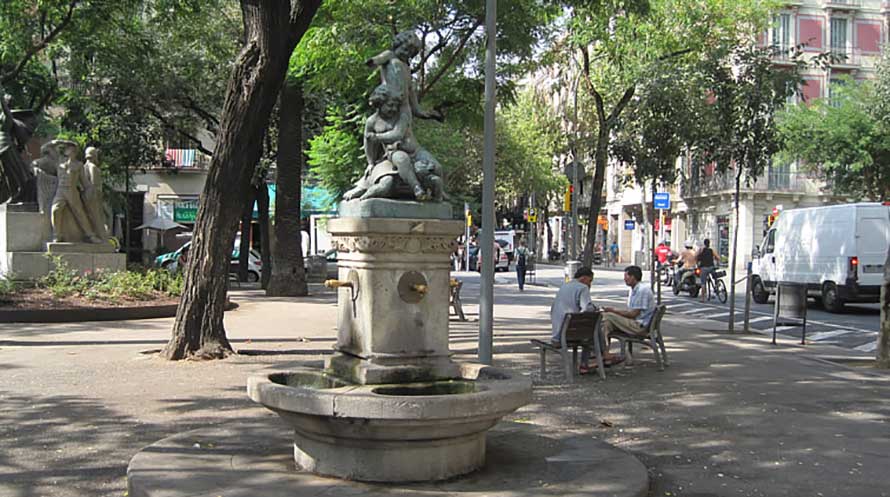 The book tells us that Antoni Fortuny Ronda owned a hat shop in Ronda de San Antonio, somewhere next to Plaza Goya. It’s where he also lived, in an apartment above the hat shop, first alone and then with his wife Sophie and with Julian. Like most of the locations in the book, Plaza Goya is pretty close to Placa de Catalunya. Walking from one to another shouldn’t take more than 10 minutes. Google Maps link here. 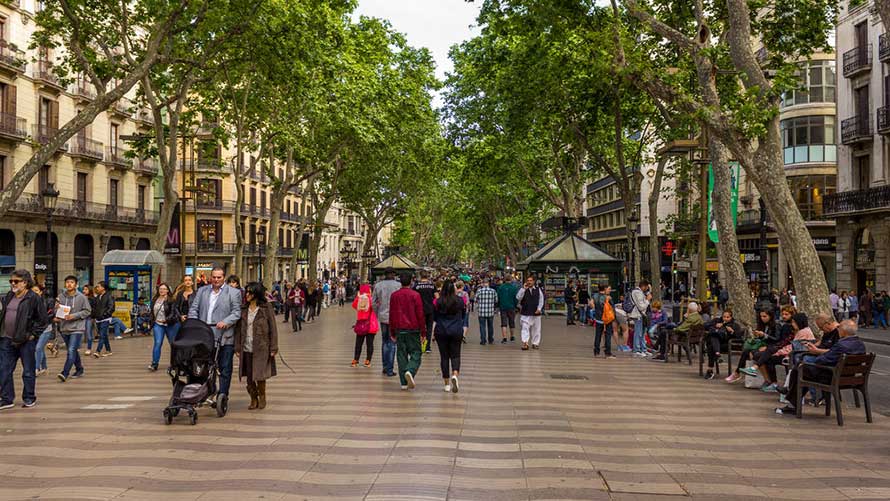 This is where the book begins, with Daniel and his father walking on Rambla de Santa Monica on their way to the Cemetery of Forgotten Books. “I still remember the day my father took me to the Cemetery of Forgotten Books for the first time. It was the early summer of 1945, and we walked through the streets of a Barcelona trapped beneath ashen skies as dawn poured over Rambla de Santa Monica in a wreath of liquid copper.” The street, also known just as La Rambla, is one of the most beautiful ones in Barcelona, right at the heart of the old city, stretching from the Placa de Catalunya all the way to Port Vell.

So these are what I think are the most important locations from The Shadow of the Wind. Like I said in the intro, the great part about all these locations is that they’re pretty close one to another, except The Angel of Mist, which is in another part of Barcelona. So a “walking tour” of most of these locations is pretty easy to plan, especially since most of that area is really beautiful and probably the most popular and touristy part of the city. How about you? Been to Barcelona? Seen any of these locations? Would love to hear your reactions in the comments.