“The Door to Hell”, Amazing Phenomenon in Turkmenistan

Located in the middle of Karakum desert in Turkmenistan (former Soviet Union), the crater near the Derweze (Darvaza) village is famous all around the world as “The Door to Hell” and it’s not hard at all to figure out why, because this 80-foot (25 meters) deep and 230-ft (70 meters) wide hole is home to an extremely odd phenomenon, burning for more than 40 years. So what exactly happened over there?

Even though most locals believe it’s something above human understanding (and you have to admit, you can’t blame them at all), the phenomenon actually has a “real” explanation. First of all, you must know that the entire area, located about 160 miles (260 km) north from Turkmenistan’s capital Ashgabat is known for its gas reserves, some of the largest in the world. And the first ones to discover that were a team of Soviet geologists that ran some test in the area in the early ‘70s. First, they thought what they had discovered to be an oil field so they set up a rig and started drilling in the area. But since the technology wasn’t that advanced at the time, they accidentally tapped an underground cavern filled with methane gas, causing the ground beneath the drilling camp to collapse and giving birth to the huge crater we can see today. While there were no casualties caused by the collapse, a large quantity of methane gas was released, causing a major environmental incident in the area (there were even some deaths reported in the nearby villages). 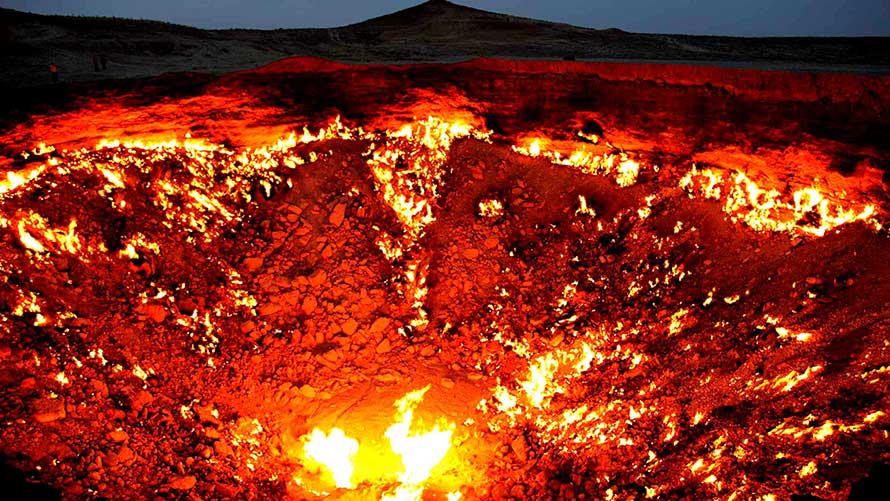 Because methane gas kept coming out of the crater, the geologists realized the best solution would be to set fire to the gas, this being one of the safest procedures when dealing with this type of situations when methane gas is released and can’t be safely extracted (methane is a very dangerous greenhouse gas if released into the atmosphere). What didn’t go according to the plan was that the scientists were expecting the gas to burn for just a few days. Instead, the “Door to Hell” keeps burning even now, more than 40 years later, creating this spectacular phenomenon.

Fortunately, being in the middle of the desert, the phenomenon isn’t very dangerous for its surroundings (including nearby human population), the only problem being the smell of burning sulfur that can be felt at some distance around the crater. However, in 2010, Turkmenistan’s president visited the area and since the country has great plans regarding its rich gas deposits, ordered something to be done about the crater (he even suggested closing the site, if necessary), because apparently its a bad influence to the other natural gas reserves in the area. Still, as of November 2012, “The Door to Hell” is still burning, attracting a lot of visitors coming to Turkmenistan and making a few amazing photos and videos possible.