Most Famous Shipwrecks Of The World

Some time ago I was reading about this Japanese fishing boat that was flushed out to sea by the 2011 tsunami and which ended up drifting somewhere off the coast of British Columbia, around the Haida Gwaii archipelago. Anyway, last week I also visited the Greek island of Zakynthos, whose main attraction is the Navagio beach, home to a beautiful shipwreck, which looks absolutely fantastic on the white sand/blue water background.

According to UNESCO estimations, there are currently more than 3 million shipwrecks around the world. And while most of them are lying on the ocean floor there are some that weren’t sunk and today create a picturesque landscape with mysterious legends around them. So let’s see which ones are the most famous or the most beautiful: 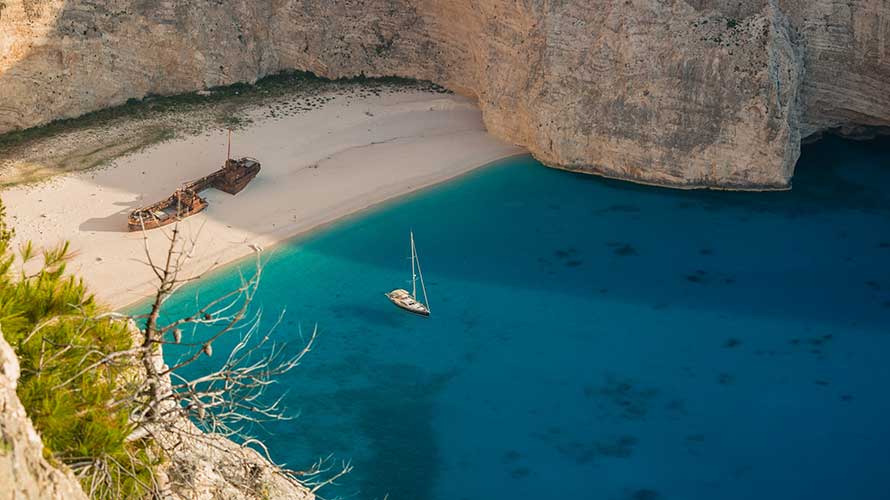 I’ll start with this one, because I really loved it and I think it’s the most picturesque of them all. The ship was called Pangiotis and was built in 1937 in Scotland. The circumstances surrounding the ship’s wreck are not clear, but the most commonly accepted story is that it was used as a smuggling ship in the later part of its life and it was stranded in 1980 while being pursued by the Greek Navy (apparently it was carrying contraband cargo between Turkey and Italy). After the crew quickly abandoned the ship, it was left there by the Greek Navy and the beach is now called Navagio, which is Greek for “Shipwreck”. However, there is some controversy surrounding the ship, many locals believing it was placed there by the Greek Ministry of Tourism to make the island more attractive to tourists (which I’m not sure was necessary because it is absolutely amazing).
Location: Google Maps
How to get there: The only way to get to the beach is by boat (you can find boat trips from most of the island). To see it from above, you can drive here and then take a short walk on the cliffs. 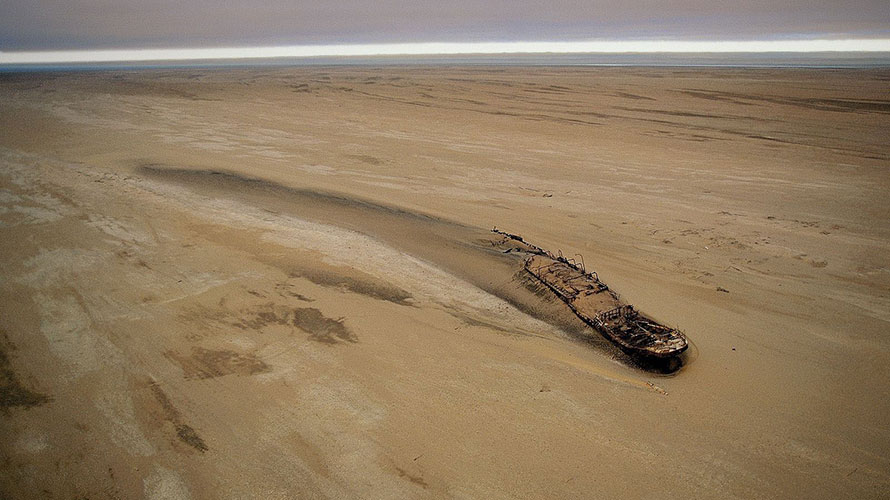 Perhaps the most intriguing shipwreck, judging by its current position, is the Eduard Bohlen, a 2,272-ton cargo ship that wrecked off the coast of Skeleton Coast in Namibia in September 1909. The ship was on a voyage from Swakopmund, Namibia to Table Bay, South Africa and thick fog caused it to founder. What’s interesting is that after more than 100 years, the shipwreck currently lies a quarter-mile (almost 500 meters) away from the shoreline and is partially covered by sand.
Location: Google Maps 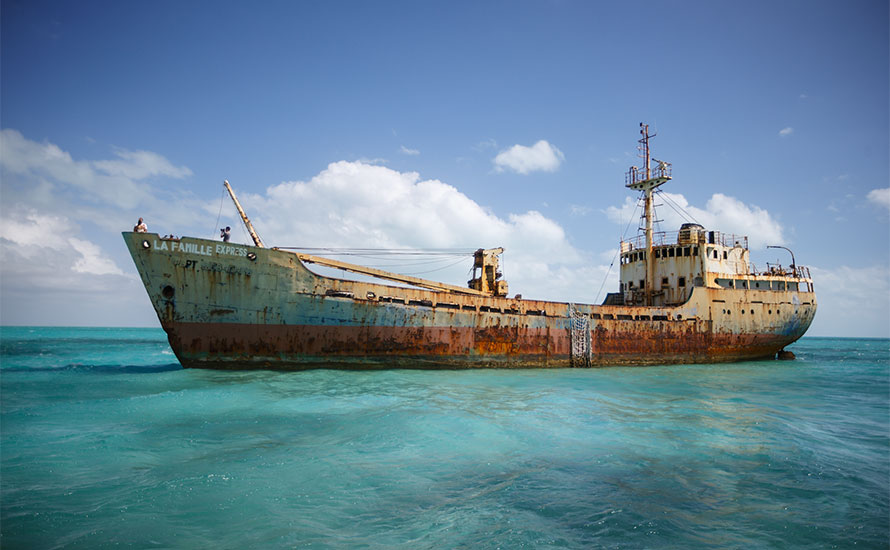 The ship was built in 1952 in Poland and a large part of its life serviced in the Soviet Navy as the “Fort Shevchenko”, until 1999 when it was sold and renamed “La Famille Express”. The circumstances of the wreck are not clearly known, except for that it ran aground during the Hurricane Frances in 2004. Nobody salvaged the ship so far and many parts fell prey to looters. Right now, the ship is a great local landmark attraction for tourists coming to this area. 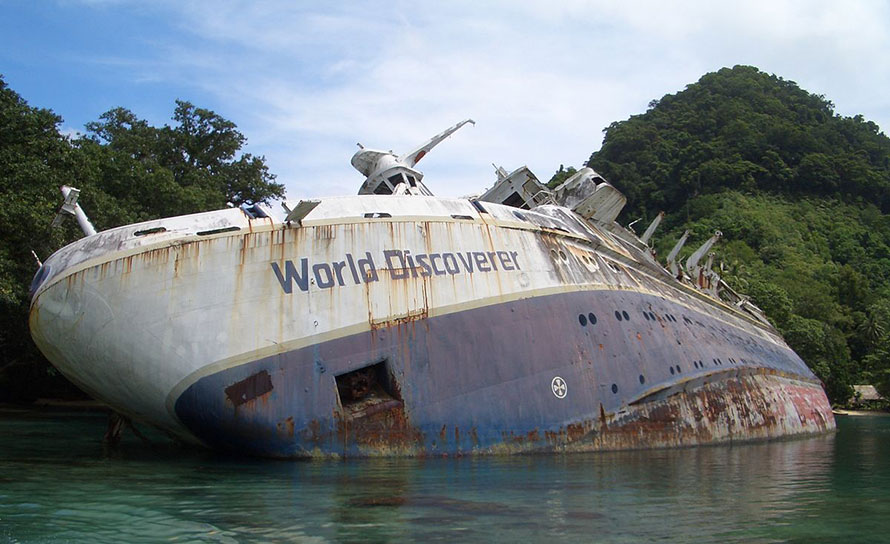 The cruise ship was built in 1974 in Germany and served until April, 2000, when it struck an uncharted rock near Solomon Islands. After all the passengers were taken to safety on a passenger ferry, the captain and the crew took the severely damaged ship to Roderick Bay where it still stands today acting as a tourist attraction for locals and for cruise ships going nearby. 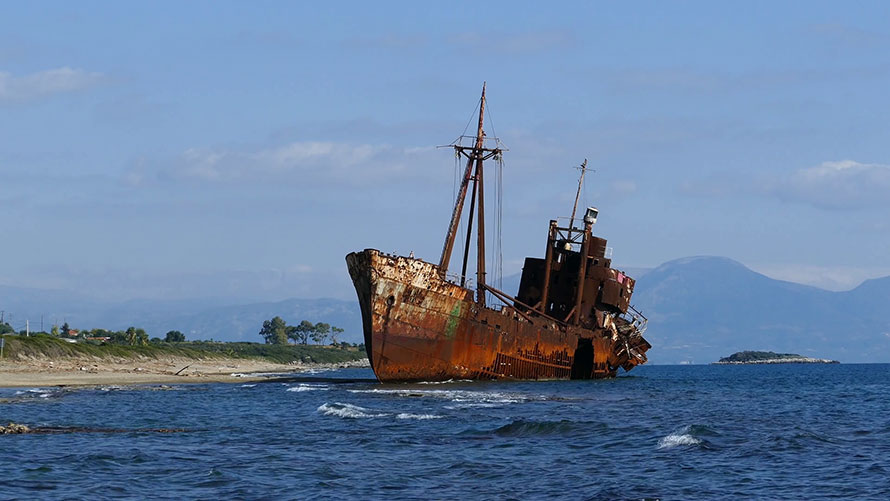 Located on a sandy beach near Gythio, a town in Southern Greece, the Dimitrios was built in the 1950s and was stranded on its current location in December 23, 1981. The official story is that the ship encountered some financial, insurance and engine problems while being docked in Gythio and was abandoned by the company owning it. After a year, the port authorities decided to move the ship outside the port, but the temporary anchorage quickly wore down and the ship ended up on its current location. However, rumors claim that it was used for cigarette smuggling between Greece and Turkey and after being captured by the Greece police it was abandoned on the sandy beach and then set on fire to hide evidence of smuggling. 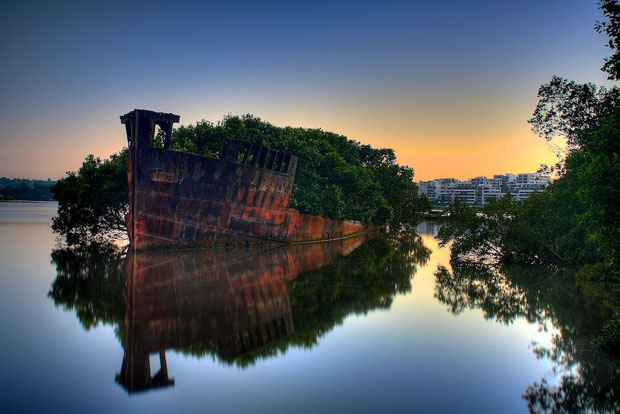 The 260-feet (29-meter) 1,140-ton steam boat was built in the United Kingdom in 1911 and registered in Sydney a year later. After being bought by the Australian Commonwealth Government, the ship was used as a supply ship for American troops in the Pacific area during World War II. After the war, the ship served as a commercial vessel until 1972 when it was retired from service and was “buried” in Homebush Bay near Auburn, New South Wales. 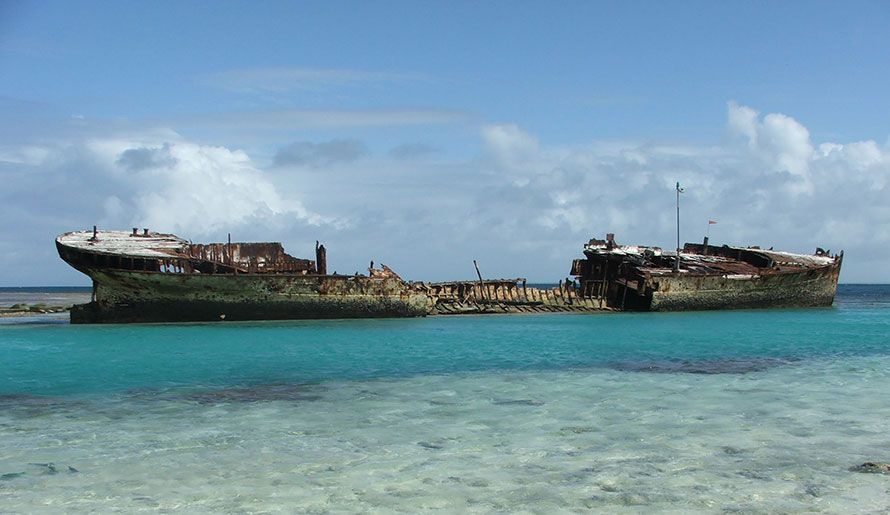 The gunship was built in 1884 for the South Australian government and served in several conflicts including the Boxer Rebellion, World War I and World War II. In 1943, while serving for the US Army, the ship collided with a tugboat and was abandoned, later on being moved to the Heron Island where it was deliberately sunk to act as a breakwater. Today, the ship’s iron hull is visible from Heron Island and can even be reached by foot at low tide.

The 2,479-ton “Loullia” bulk carrier started its “career” in 1952 and in September 1981 wrecked in the Straits of Tiran while going from Jordan to Suez. After an unsuccessful attempt by the crew to refloat it, it was abandoned there becoming a great photography spot for people going to the Gordon Reef. There are also some rumors that while it was still in good shape it was used by drug dealers operating in the area.

Like many shipwrecks, the one near the Vila Nova de Milfontes village in Southern Portugal has unknown origins. The only thing we know about it comes from locals, who claim it was a Dutch tugboat that was used for contraband and which ran aground trying to hide from the Portuguese coast guard. 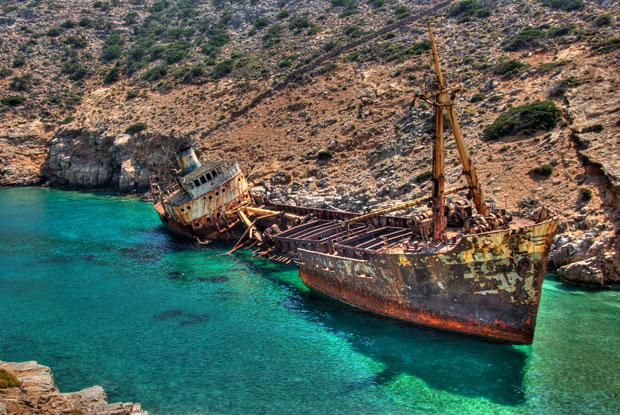 The Olympic was a commercial ship that was driven ashore (apparently by pirates) in 1979 while coming from Cyprus and heading for Greece. After an unsuccessful attempt to pull the ship out of the gulf, it was abandoned there and became one of Amargos Island’s most popular landmark. The shipwreck was also featured in Luc Besson’s movie “The Big Blue”. 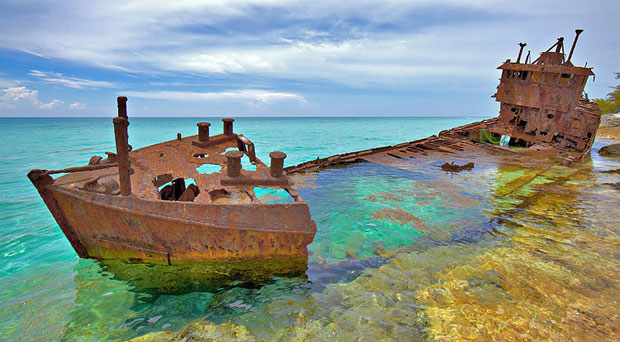 While on a voyage from Belize City, the “Gallant Lady” freighter was smashed into the shore several decades ago, in the Northern part of Bimini, Bahamas. After being abandoned, the salty sea water paid its toll and now the ship’s skeleton is one of the most attractive landmarks in Bimini. 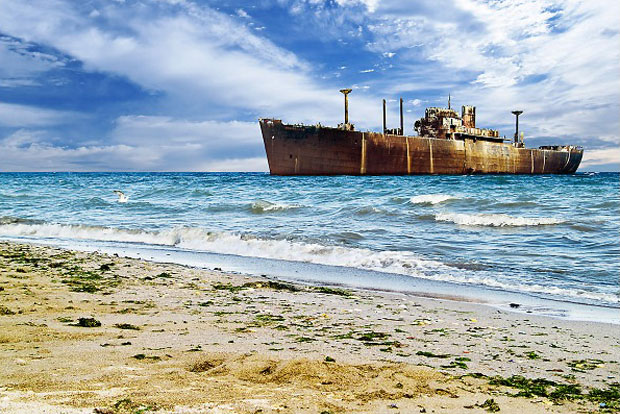 One of the most popular landmarks of the Romanian seaside is the Evangelia shipwreck in Costinesti resort. The commercial ship, which belonged to famous Greek magnate Aristotle Onassis, was stranded in the 1960s after getting caught between two large underwater rocks in bad weather. 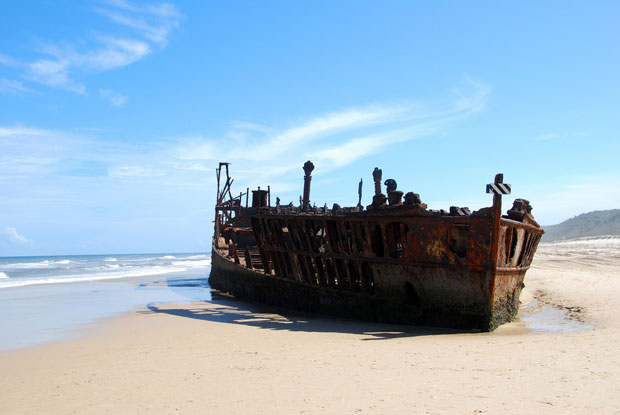 Built as a luxury liner between Australia and New Zealand, the Maheno also served as a hospital ship during World War I. In 1935, the ship was retired and it was moved to Japan for scrap metal. However, it was caught in a strong storm and was thrown on 75 Mile Beach on Fraser Island. Unfortunately, the shipwreck is in a bad shape, especially after being used for bomb practice during World War II by the RAAF. 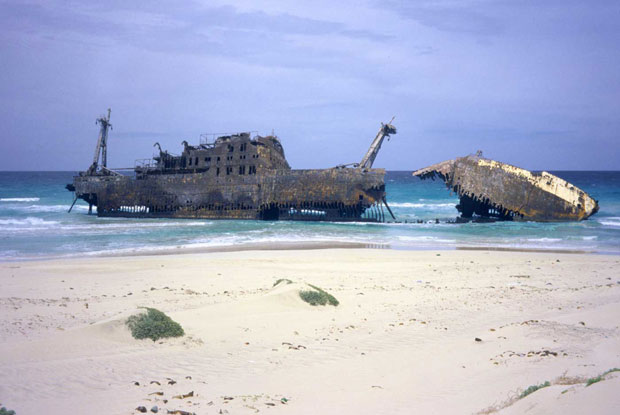 The ship was carrying an impressive cargo, gifts from the Spanish government for their supporters during the ’60s economic crisis, including sports cars, clothing, machines, beverages. On September 1, 1968 the ship was passing Cape Verde islands on its way to Brazil and Argentina when it ran aground. After a local tugboat tried to save the ship, unsuccessful, it was abandoned there, not before all the precious cargo was carefully removed. Today, it is a symbol of Boa Vista.