This is the Best Sony Waterproof Camera

Ever since photography entered the digital age, the two main competitors dominating the market were Canon and Nikon. However, after some troubled times in the early 2000s, Sony has made incredible progress and today is considered one of the biggest players in the digital camera world, building some of the best sensors around while also supplying parts for other manufacturers, including Nikon. That’s why more and more people are now turning to Sony when looking for a new camera. And since our ninjas are specialized in waterproof products, if you’re on the market looking for a Sony waterproof camera, we have gathered some sweet deals for you. We’ve reviewed one of the best options that money can buy so you can end up having a small waterproof vacation companion that can freeze memories in time.

It’s never easy to review a Sony product. First of all, it’s time-consuming, because a brand like Sony always tries to add grand features even in their smaller items. Second of all, Sony products are known for being complex, so there are lots of things to analyze in a complete review. That being said, let’s see what the DSC-TX10 has in store for us.

Aside from being waterproof, the DSC-TX10 is also freezeproof, shockproof and dustproof. So far, it’s caught my full attention. It seems to be the kind of camera that you could take with you camping, but also on the beach, without being afraid that a little wind and sand could destroy it. From the moment you set your eyes on this camera, you will notice its minimalist design. It really does make sense: masking all the buttons and keeping them safe. Even if you think “there’s no way this little thing is so well-protected”, you should know that the camera is waterproof to 5m, freezeproof to -10°C, shockproof to 1.5m and fully sealed against dust. GG, Sony!

Even if it looks simple, the TX10 is quite an elegant digital camera. It comes with a sliding aluminum cover which is here to protect the lens. A downside that I have to mention is the fact that you can still turn the camera on by accident. The fact that it doesn’t have a finger grip and it’s made of smooth aluminum is something we didn’t like because there are high chances that this camera will slip from your hands at some point. A wrist strap is highly recommended, especially if you’re known for mishandling gadgets. Since it’s a touchscreen camera, there aren’t really many buttons for you to play around with. You do have the power button, the playback, and one-touch Movie record buttons, but also the shutter button. 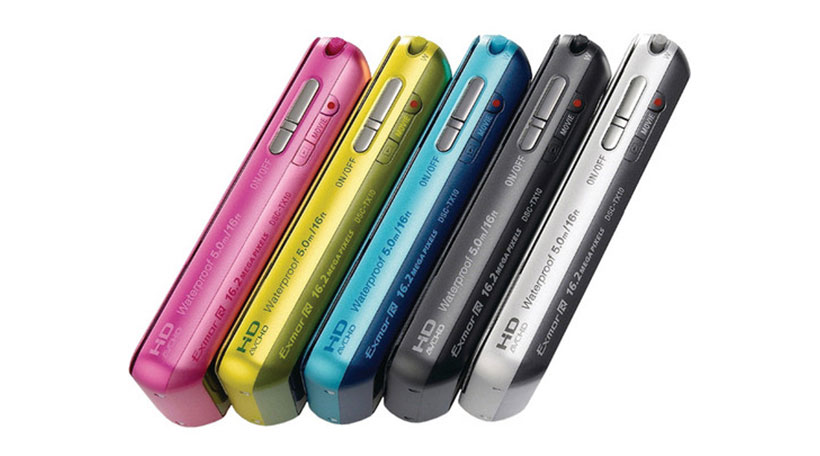 The screen is very sharp, very crisp, but it doesn’t handle strong light very well. The shoulder of the camera is where you’ll find the zoom controls. The screen does allow a bit of customization, meaning that you can set up your own quick-access icons on the main screen. This allows you to always have at hand the shooting features that you use the most.

Compared to its older brother, the TX9, the TX10 has an additional 4 MP to its camera, adding up to a total of 16 MP. That’s a pretty big number for such as small gadget. The backside illuminated sensor makes the camera more receptive for technical reasons that you’re probably not interested in (has something to do with the wiring being positioned behind the chip, not in front of it). Translations: photos have less noise even in low light conditions. The Sony Bionz sensor is matched with an Exmor sensor which means images are processed really fast. That’s what you’d expect from a point-and-shoot digital camera after all. The TX10 is fitted with a 4x optical zoom that offers the 35mm equivalent of a 25mm-100mm focal range. The lens is entirely contained within a sealed housing on the shoulder of the camera and further protected by the camera’s sliding front cover.

Let’s continue with the part you’re really interested in: the features. There aren’t that many shooting modes, but when you’re looking for an affordable Sony waterproof camera, you really don’t expect to take award winning photos. You do have Intelligent Auto, Superior Auto, Program and 16 individual Scenes modes making up the regular shooting options. Program mode is the most flexible option you have because it allows you to access a decent number of individual settings. Superior Auto differs from Intelligent Auto mode in that it’s effectively a multi-exposure mode that combines anywhere between 2 and 6 images before combining them to produce a final image. This mode is great for use in low light conditions.

The Panorama Shooting mode is something you’ll probably use frequently on your travels. Sony is very well known for its panoramic technology, so this camera won’t leave you disappointed, at least not at this chapter. Background Defocus is another mode you’ll like since you’ll want to shoot portraits of yourself and family/friends. The 3D Shooting mode is also something worth mentioning. You can use it to shot 3D still images, panoramas and multi-angle. However, you’ll need a 3D monitor to view the images.

Since this is not a professional camera, you won’t be able to shoot RAW pictures (JPEG is pretty much the only option you have). You can, however, shoot full HD videos, at a resolution of 1920 x 1080. The camera has 2 microphones located on the front side. They allow you to record stereo sound.

But what does this Sony waterproof camera have in store for us when it comes to image quality? After all, what’s the point in buying a small waterproof camera if the images you take turn out to be horrible? Rest assured, the TX10 delivers images that are way better than what you would expect from a camera so small and so simple-looking. Pictures taken are sharp, with good level of details. The colors are well-reproduces and, depending on the shooting mode you choose, you can end up with different levels of saturation, sharpness, and contrast. The Superior Auto mode excels in delivering saturated images. The pictures are also softer when shot with this mode.