How Much Sleep Does My Baby or Toddler Need? 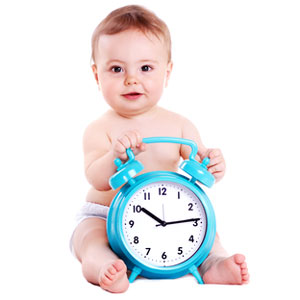 One of the biggest concerns that many new parents have is understanding how much sleep their infant or toddler needs each day.

If we set our expectations too high on the amount of sleep they should be getting, it will likely be frustrating for both parents and child.

If we set expectations that are too low, the child might not be getting the sleep they need and become irritable and over-tired. This makes the entire sleep training process a lot more difficult than it needs to be.

The best thing to do to find the optimal sleep time is to start logging your child’s sleep each day for an entire week. Record the amount of hours during the night and during nap time(s).

It’s important to only record the times your child is actually sleeping and not just playing or crying in their crib or bed. Since we can’t be watching them every minute, you can estimate by using the time that it is quiet.

Just don’t start the clock as soon as you lay them down unless you have some kind of “Super Baby” which falls asleep instantly upon making contact with the mattress.

Whether your child is an extremely consistent sleeper during nighttime and naps or completely inconsistent in their wakeup times and nap lengths, it’s common that most children consistently get about the same average amount of sleep during a 24-hour period day-to-day.

What’s also fairly common is that their sleeping times may move around quite a bit during days and nights.

No two babies or toddlers are the same when it comes to sleep time and lengths. But to give you a generally idea of what’s considered average, below are some general time guidelines for various ages.

While there will always be infants and toddlers requiring more or less sleep than what’s shown below, it’s widely accepted that most children under 2 years old will need at least 10 hours of sleep during the night to fully rest and recover their bodies.

10-11 hours during the night; occasional 2-3 hour nap depending on age/child

So again, these are just recommended guidelines to give you an idea of average sleep times. If you feel like your child needs slightly more or less sleep, it’s best to trust your instinct. But if the amounts of sleep varies by hours, you may need to look more into it to make sure it’s healthy for your child.

Also, the times your little one goes to sleep should be what works best for them. Just because you have a friend whose 2-year old has a 10pm bedtime doesn’t mean a 7pm bedtime isn’t ideal for your child.