The ferries leaving Piraeus, Athens main port, sail the Aegean Sea towards Crete Island and make beautiful stops on the islands of Siros, Paros, Naxos Ios and Thira (best known as Santorini), all part of the Cyclades Archipelago. The last one, Santorini, besides being a very romantic destination, also has an impressive geological and historical past with a lot of significant moments for our history.

The Santorini Island was also known in the past as Strongili, Filothere, Calavia, Teusia or Thiro and is 150 miles (240 km) away from the Piraeus port and 77 miles (125 km) away from Iraklion (Crete) and it used to be a resting place for fishermen or businessmen working in the area and also a strategic location during the often conflicts of different Mediterranean civilizations. 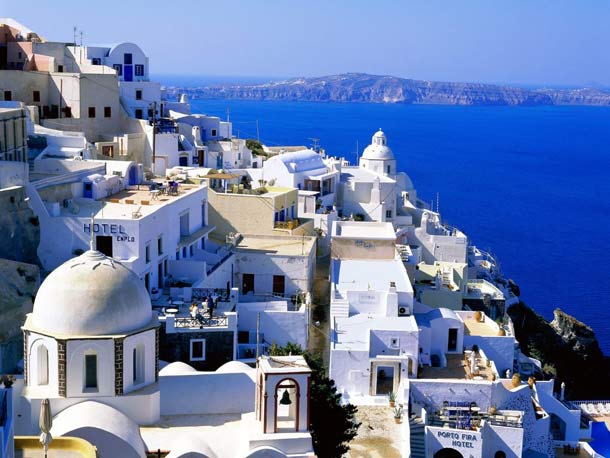 A mini-archipelago in the heart of Cyclades Archipelago

The Santorini mini-archipelago consists of several island featuring a circular placement and with a total area of 46 sqm (75.4 square km). The largest island is Thira (or Fira) has a crescent-moon shape and is the most populated one, with more than 20 settlements. The highest peak is also located on Thira island, Korifi Ay Ilias, with a total height of 1,857 feet (566 meters). Towards west, the “ring” is completed by the small Aspronissi Island and by Thirasa Island, which has a 964 ft (294 meters) maximum height. In the archipelago center, the islands of Nea Kameni and Palea Kameni feature a set of perfectly preserved volcanic craters which indicate recent eruptions.

The circular layout and the overall look of the islands, with steep cliffs towards the interior and slow slopes towards the exterior indicate that the small archipelago is a remain of powerful volcanic system, whose upper part was blown up by powerful explosions and sunk, giving birth to a splendid Caldera.

On the steep cliffs that contour the caldera we can see broken fragments of rock (breccia), consolidated volcanic ash (tuff) and ponce stone (lava that suddenly become solid when coming in contact with water) and several other volcanic formations which draw attention from far away due to its color: brown, greenish or yellow-reddish.

The 920 to 1,148 feet high cliffs, very steep and rocky, are hard to climb but are crossed by winding roads that connect the ports and the small harbors with the villages from the interior villages facing the caldera. On the other part of the islands, the slopes are slow, the valleys are shallow (called barrancos) and the smooth surfaces between them (planeze) indicate a recent volcanic history, too “young” to be eroded.

The Nea Kameni Island, located in the center of the caldera, has a total height of only 436 feet (133 meters) is very recent and it offers a specific volcanic landform with “fresh” cones and crests, pointing out that volcanic activity on Santorini island is only half dormant.

Until the Pliocene, the Santorini island, like all islands in the Aegean Sea, was part of a large landmass that connected Europe, Asia and Africa. Significant tectonic activity led to the sinking of large parts of the landmass, the remaining formations being the islands in the Cyclades Archipelago. In those times, Santorini was only 9 sqm (15 sqkm) wide and was 1,870 feet (570 m) tall. However, upcoming volcanic eruptions enlarged the island and gave it a more rounded shape which actually gave the island its first name, Strongili (is Greek for rounded, cone-looking island). 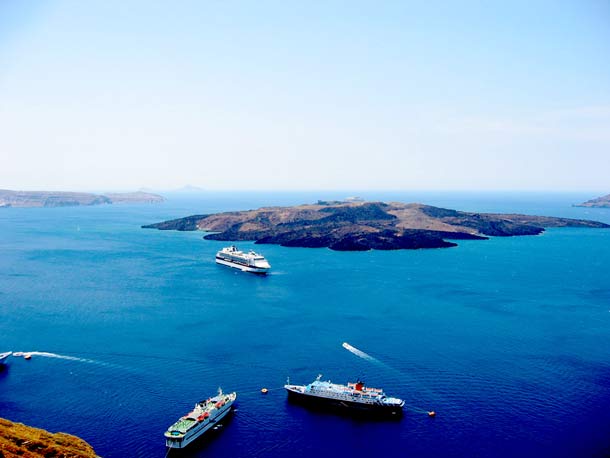 The Santorini Island was inhabited since the Neolithic age and the ancient Greeks living here reached a remarkable cultural and social level. Around 17th century BC, a violent volcanic eruption destroyed the central part of the island, forming the huge caldera we see today and also killing most of the island’s inhabitants, which remained abandoned for several centuries.

The waves of history

Around 1500 BC, the island, called Callista (“the beautiful one”) by famous historian Herodotus, was occupied by Phoenicians, the Spartans take over control in 1050 BC, changing the island’s name to Thira, and in 165 BC Romans conquer it. During the crusades, after the fall of the Byzantine Empire, the island was given to the Venetian Republic in 1207 and was renamed to Santorini (coming from “Saint Irene” in Italian). After several centuries of conflicts between the Turks and the Venetians, the island is won by the Ottoman Empire in 1579 and in 1821 Greece gets the island after it declares its independence. 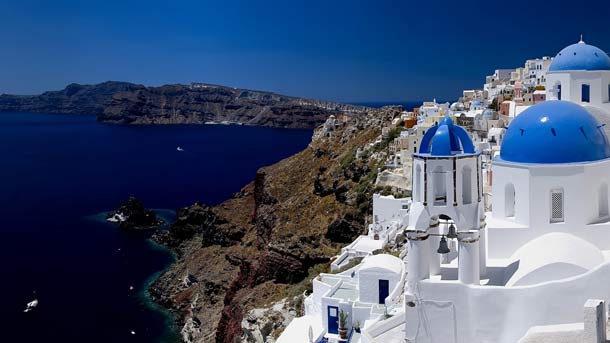 In parallel with historic events, the highly disputed island also changed its aspect, starting with the 15th century, due to the increasing volcanic activity: the Palea Kameni island is formed in 1457, the 230 ft (70 m) Nea Kameni island forms, in just 22 days, the Kouloumbos island is destroyed in 1650 and the small Aspro island is born in 1866.

Today, Santorini has over 6,500 inhabitants which live in 22 settlements, with the Thirasia island being the least inhabited, with only two villages. The largest city is Thira (Fira), with more than 1,300 people living here.

Most of the seaside houses are built in Arabic style and have one store, rarely two. They are all white, with light blue ornaments and are all gathered up at the top of the islands, so from far away look like the mountains are covered in snow. There are no tall trees, just bush and small Mediterranean vegetation which grow in the small yards or around the narrow streets.

The population’s main occupations are agriculture, cotton harvesting, vineyards, fishing, sailing, trading, using volcanic tuff for cement and, of course, tourism. The latter is strongly supported by the beautiful and accessible scenery, the famous Santorini sunset (one of the most beautiful in the world), the sandy beaches and top class accommodation. 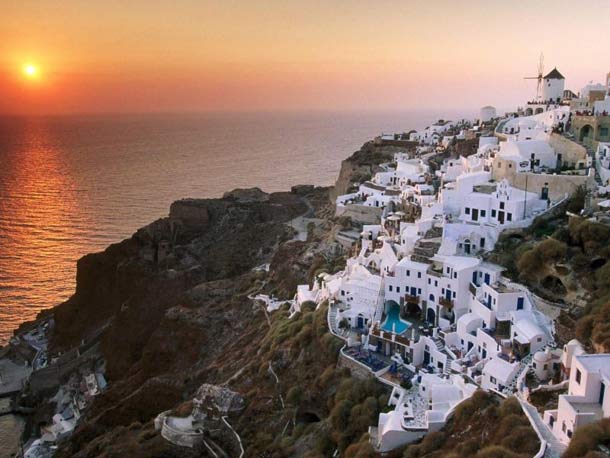 Tourists usually visit the two archaeological sites that unveil the island’s history. Digging supervised by Spiros Marinatos in 1967, at Akrotiri, unveiled an ancient Minoan town with wooden houses and painted walls, water systems, ceramic pots for wine, beer or olive oil. After the 17th century cataclysm, a Cycladic civilization with Mioan accents develops here. The lack of skeletons show that the population, warned by the earthquakes before the eruption, were able to quickly evacuate the island. The other interesting location is Mesa Vouno, discovered by F. Hiller von Hastingen between 1895 and 1903 which unveiled an ancient town, with signs of Greek, Roman and Byzantine culture including an Agora, theater, gymnasiums, therma, sanctuaries and statues.

With a history spreading across several millennia and with a more than beautiful present, Santorini island invites everyone to visit it and is a wonderful summer destination for those dreaming of a splendid location and a rich historical experience.