Is the CAT S60 the best waterproof phone?

To be perfectly honest, I vote for the CAT S60 Phone and I’m going to build a solid case in its favor in the next following lines. 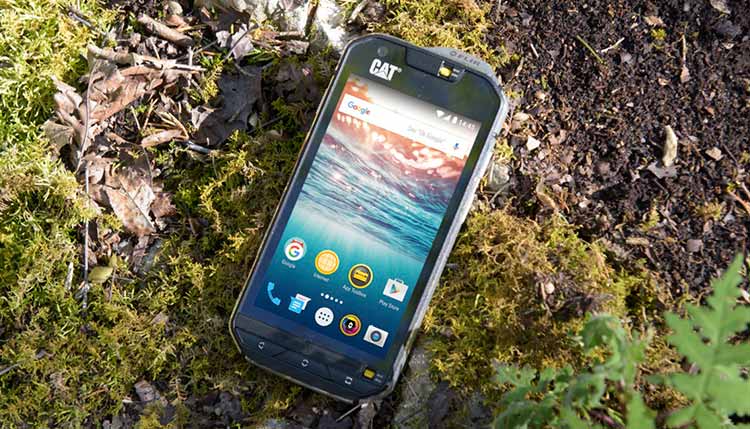 Before starting any sort of introduction, you should know that this is not a smartphone for smartphone-addicts. While it does come with all the necessary tools to enjoy a pleasant browsing experience, this is not the best waterproof phone because of its performance, but because it’s rugged and has some pretty kick-ass features that I will point out later in this article.

The S60 was announced back in February 2016 and it was available for sale in June of the same year. Its measurements are 147.9 x 73.4 x 12.7 mm (5.82 x 2.89 x 0.5 inches). It comes in a single SIM version which is only available in South Africa. People from the other corners of the globe will have to purchase the dual SIM version. As far as the display is concerned, it comes with a a-Si AHVA capacitive touchscreen, capable of rendering up to 16 million colors at a resolution of 720 x 1280 pixels. It measures 4.7 inches in diagonal, which is pretty decent considering that even the latest smartphone models have an average display diagonal of about 5 inches. The touchscreen is protected by Gorilla Glass 4, because this is one of the most resistant phones on the market.

If you’re interested in what’s inside, let’s check out what fuels this baby. The Qualcomm MSM8952 Snapdragon 617 chipset is combined with a 4×1.2 GHz Cortex-A53 & 4×1.5 GHz Cortex-A53 octa-core CPU, which doesn’t exactly make it the weakest smartphone on the market. The GPU could be better, as the Adreno 405 is currently pretty outdated. However, this is not a phone you purchase to play mobile games. It comes with 3 GB of RAM and 32 GB of internal memory which, with a suitable microSD card, can be extended up to a rather generous 256 GB. The 13 MP camera has some amazing features, but I’ll touch on that a bit later. It can record videos up to 1080p, which is pretty awesome if you now consider that you have a waterproof and rugged phone that can record high-quality YouTube videos. That would make for some pretty awesome memories on your future trips, even if you’re future trips imply skiing in the Andes.

You have your usual 802.11 b/g/n Wi-Fi connection, which means saving money on mobile data consumption. It has all the regular features that you want to have in your smartphone, like radio, fast battery charging, document viewer, MP3 player, photo and video editor and more. The Li-Ion 3800 mAh battery is non-removable, which could give you a hard time if you’re ever having battery issues (all the more reason to love my Huawei).

As I mentioned before, there are several features that make the S60, the best waterproof phone on the market.

The side-mounted buttons are big and chunky, so you can still use them easily while wearing gloves. That function extends to the screen; the display also recognizes your digits just fine even when they’re wet. CAT has added a handy programmable button on the side, and there’s even an SOS button hidden beneath a flap that will turn on a GPS alert system for when you need to call for help. The one downside is that commonly used ports for things such as the microSD card slot and the headphone jack are hidden behind somewhat annoying removable flaps. 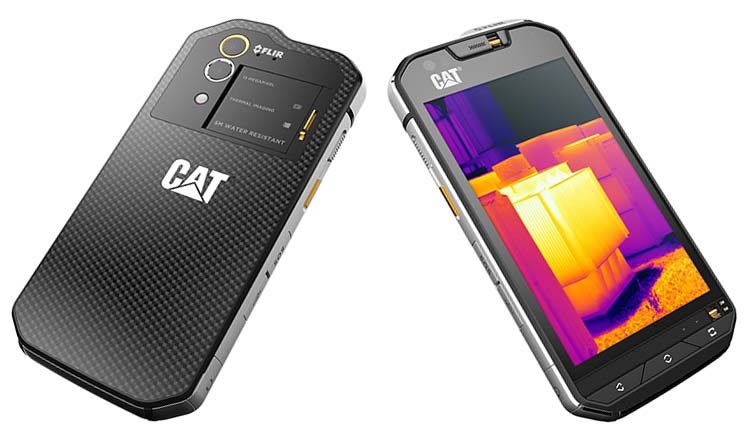 As promised, the S60 is a rugged smartphone that can resist about 30 to 60 minutes underwater, but it has only been tested at a max 5 m depth. There are two toggle switches at the front to switch between water submersible levels of up to 2m to 5m. The reliability increases as you that each port of the CAT S60 is covered by a flap which is not quick to open. Keep in mind, the smartphone was built to military grade specifications and delivers exactly the experience you would expect from a military device.

As you may have guessed by reading the subtitle above, the CAT S60 is pretty innovative as far as its camera is concerned. Let’s just say it bring smartphone usage to a whole new level. The CAT S60 comes with a basic 13-megapixel rear camera and secondary FLIR thermal imaging sensor. The thermal imaging sensor is the phone’s stand-out feature. It’s based on MSX thermal imaging camera tech and it’s able to capture really good images and video. The 30 m distance accuracy is pretty impressive and it can be used for determining hot and cold spots wherever needed.

With night vision being supported as well, this sensor can help you get exact temperature reading on items both day and night. You can also customise the exact filter used to showcase the temperature data. These include basic Lava and Iron modes. These will show heat data in shades of yellow, red and orange, as well as more esoteric ones, such as Rainbow, which showcase it in a more psychedelic mix of colors. By now, you’re probably wondering who needs such a feature? Police men, firefighters, engineers, they could all use this thermal imaging sensor. You could too, especially when you need to identify hot and cold spots around the house. For instance, you can use it to spot wires before you start drilling holes in the walls. As funny or absurd as it may sound, you can also use it to identify coal temperatures when you’re firing up the barbeque.

What’s even more surprising is that the CAT’s sensor is capable of working in environments with low visibility, such as gas-filled rooms. This is possible due to its infrared sensor which allows you to use the camera to see through the fog.

While the thermal imaging feature is nothing short of amazing, we have to discuss camera speed which, for some people, could be an issue. The shooting speed is laggy and if you try to take more than one picture at a time, the camera app is bound to lock up, showing a very visible and annoying delay between the moment you press the button until the picture is actually being taken. Another problem is that the camera is consistently out of focus, which is not ideal for moments when you need to take photos in a hurry. One more downside of the camera is the fact that it’s very hard to capture moving images, especially in low light. Images shot in low light are uniformly pixelated and full of noise.

The 5-megapixel front-facing camera is decent enough for average selfies and for video calling in good lighting.

Check the S60 price on Amazon

Before spending $630 on what promises to be the best wateproof phone on the market, how about I take you through the TL;DR of this review?

Long story short: if you’re looking for a waterproof phone that’s super-classy and waterproof resistant and are willing to spend some extra money, this may not be the best choice for you. However, if you’re looking for a phone that you can drop, scratch, get wet, use in wind, snow, dirt, the S60 does the job perfectly. At the moment, the best offer we could find was on Amazon, so click here to check the price.