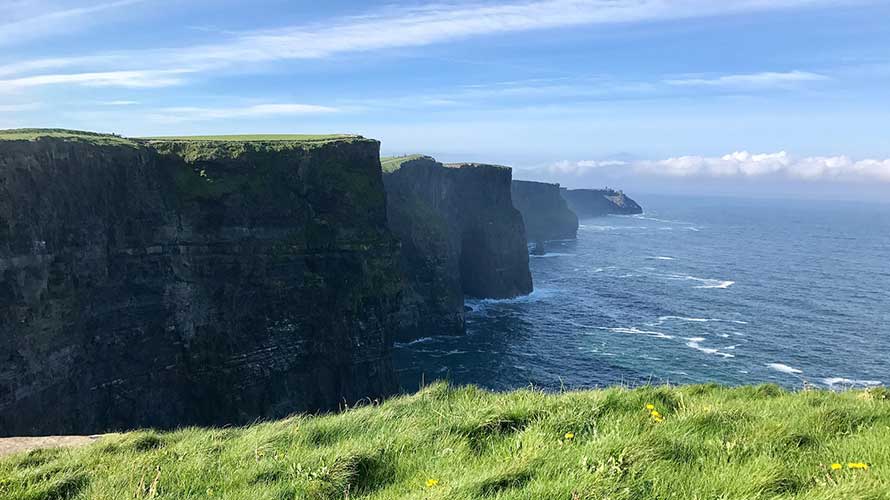 This spring, in May to be more precise, I had the chance to live in Ireland for about three weeks. My cousin and a few friends are involved in an online start-up and they were there on business so I decided to visit them and catch a break after a rough period of my life. So there I was, on May 12, landing in Dublin for the first time in my life, on a three week holiday.

Considering I was about to stay there for three weeks, while packing I was asking my cousin what’s the weather like. He told me to drop the short-sleeved shirts and take as many sweaters as possible. Well, knowing how’s the weather in that part of Europe, I was expecting something a little bit nasty, but I was completely caught off guard once I got there. First of all, when I left home there was something like 86 F (30 C). So getting from that to 58-59 F (15 C) wasn’t fun at all. And then there was this other “small” problem. I didn’t want to grab a cab, because my friends’ place was only a bus station away from the airport (around the O2 Arena), so I went with the bus. The problem was that from the bus station to the apartment I had to walk for about 10 minutes, which normally is not a problem (I actually love walking), but when you have to do it on one of the worst rains I had seen lately, not fun at all. I swear, I saw showers where the water’s pressure was smaller than that rain. So I got there with absolutely no part of my body that was dry. Not a good first impression, Dublin. But that was just something to scare me a little, because the rest of the time I spent there, the weather was incredible (I found out I had the chance to experience the Irish summer at its best…sunny, no rain and perfect temperatures).

Out of the three weeks spent in Ireland, most of the time I was in Dublin. However, since I’m not really attracted by museum (except for the domains I’m interested in), I did a lot of walking in Dublin, especially in the city center. The city is nice (nothing jaw dropping) and it’s landmark, The Spear is…well…a spear. Actually, a really tall spear, right in the middle of the city, the only impressive thing about it being its height. But what really gets you in Dublin (come to think about, the entire Ireland) are the people. If you want to see how relaxed and polite people look like, you have to visit Dublin. If you have a question, you’ll be immediately answered to, people are making conversations out of anything (not to mention the “trivial” weather conversations) and if you look a little more persistent at someone you’ll instantly be answered with a smile or a “Hello!”.

Besides Dublin I also managed to see some of the rest of Ireland. The island’s inner part is not that spectacular and all you can see is hills filled with trees, sheep, cows and goats farms. However, this changes once you get to the coast area, which is incredible. We had some things to do in Cork, which is a small city in the South and where we visited a pretty cool place called FOTA Wildlife Park. I’m a big fan of wild life (there are some cities I visited where I didn’t get to see one museum but chose to visit the Zoo instead) so I loved this place. It’s some sort of zoo, without so many animals, and the day’s main attraction was the Cheetah Run. So what happens is that the cheetahs are fed in a more natural way, with loafs of meat being hanged on a wire that circles around the den, making the animals “hunt” their lunch, reaching a speed of almost 40 mph (around 60 kph). In the wild, cheetahs can sprint from 0 to 70 mph (110 kph) in less than 3.0 seconds (to get an idea of what that means, the Bugatti Veyron, the world’s fastest production car, sprints from to 62 mph in 2.5 seconds).

From Cork, we decided to go back to Dublin on a different but more scenic route, on the West coast, all the way to Galway. We spent the night at a small guesthouse close to Tralee, enjoying a beautiful view of the Atlantic Ocean (unfortunately, I lost their business card and can’t seem to find it online). And the next day we visited one of Ireland most important tourist attractions, the Cliffs of Moher. Not much to say about this place, you have to see it for yourself to realize how impressive it is. The ticket costs around 6 Euros and we got to see the cliffs and the amazing new visitor center (it was opened a few years ago and it’s built almost entirely underground so it doesn’t ruin the view). Not to mention that besides the “official” track and viewing area, there’s also another track (without any protection fence) where you can admire the cliffs’ height (though you have to be a little careful and I wouldn’t recommend it if you have problems with height).

The next weekend we took another road trip, this time to Northern Ireland (where kilometers and the Euro goes away to make room for miles and Pounds). We had to make some adjustments to our route because in the morning we heard on the radio that the Olympic torch had just reached Northern Ireland and their schedule for the day was exactly like ours (we didn’t want to risk running into road blocks or detours). However, we still managed to see what we wanted, the Giant’s Causeway (the only UNESCO World Heritage Site in Northern Ireland), a very spectacular rock formation. We also crossed the Carrick-a-Rede rope bridge (ticket cost about £6, I think), built by salmon fishermen a couple of hundred years ago (though the current rope bridge was built in 2008, to make sure it’s strong enough for the large number of tourists). The rope bridge connects the mainland with a small island that still has the small dock used by fishermen and the walk across it is spectacular, but doesn’t seem too dangerous (it’s around 100 ft above the sea) and we were a little amused to find out that there were people that had to be taken back by boat because were too afraid to cross it back).

The last part of the day we spent it driving to Belfast and then back to Dublin. Unfortunately, we wanted to visit the Titanic museum in Belfast (that’s where the ship was built), but all tickets for the day were booked weeks ahead (it was Sunday and a bank holiday was the next day). From what we could see, Belfast didn’t seem to have anything special, but we were really sorry we didn’t get to see the museum which looked amazing both on the inside and the outside and listen to probably some incredible stories about the ship.

It’s kinda hard to speak about three weeks in just a few lines, but basically this was my experience in Ireland, a country which left a big smile on my face and which even though it doesn’t impress through natural beauty (like Montenegro, for example), the people and their way make it absolutely fascinating. And while there were some places I skipped in Ireland, it’s a place I’ll definitely get back to (considering my friends will still have business over there in the future).